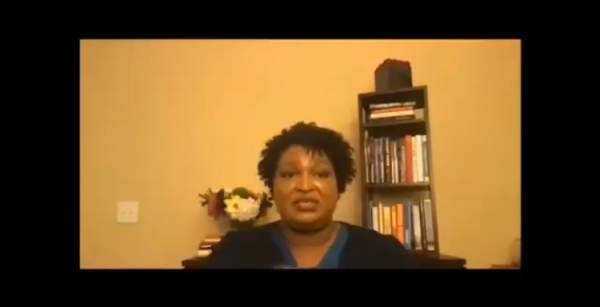 Failed Democrat Georgia gubernatorial candidate Stacey Abrams on Wednesday lamented that illegal aliens “are now no longer able to elect anyone who represents them.”

Abrams is being pushed as a possible Vice Presidential candidate for Joe Biden.

Abrams said that 50% of the population under the age of 15 is “communities of color” and if they are “removed from the calculation,” a “whiter, more Republican voting base” will be created.

This is why Abrams and Democrats are fighting to count illegal aliens in the census and plotting the racist use of re-districting.

She is also admitting she wants illegal aliens to have power over American citizens.

Last month a bombshell video of Stacey Abrams plotting to use re-districting to “stop white people” from governing was uncovered.

The 2014 video, uncovered by Patrick Howley at the National File, revealed Abrams’s plan to change the racial demographics of the electorate heading into the 2021 congressional and legislative re-districting efforts based on the 2020 Census.

BREAKING: I have Stacey Abrams on tape in 2014 plotting post-Census RE-DISTRICTING in 2021 to stop “WHITE” people from governing.

Stacey Abrams wants illegal aliens to be able to vote because it would balance “white people.” If she is Joe Biden’s running mate, she will be president within a year, if he’s elected. Watch for yourself. pic.twitter.com/cTdvVe0xjl