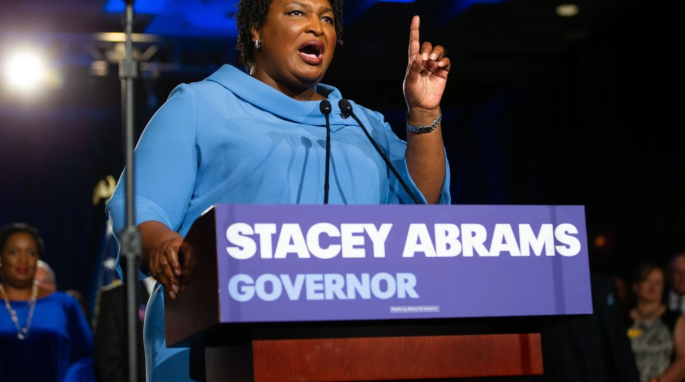 A “voting rights” group that Democratic Georgia gubernatorial nominee Stacey Abrams founded has given millions of dollars to a law firm led by the chairwoman for Abrams’s gubernatorial campaign, tax records show.

Fair Fight Action spent $9.4 million in 2019 and 2020 with Lawrence & Bundy, a boutique Atlanta law firm that counts Abrams’s campaign Chairwoman Allegra Lawrence-Hardy, a close friend of the candidate, as one of its two partners, according to the nonprofit group’s 2019 and 2020 IRS tax filings.

It is unclear how much Lawrence-Hardy’s firm has received from Fair Fight Action in 2021 and 2022, the years the lawyer was lead counsel for the nonprofit group’s lawsuit against Georgia Secretary of State Brad Raffensperger. Fair Fight Action filed the lawsuit in November 2018 after Abrams lost her 2018 gubernatorial bid to Republican Gov. Brian Kemp, whom she is currently running against, claiming the secretary of state engaged in voter suppression.

That lawsuit concluded in September when a federal judge in Georgia found that the Peach State’s election practices did not violate voters’ constitutional rights.

“They say go grift or go home — and Stacey Abrams is apparently trying to do both,” Stephen Lawson, a Republican political strategist in Georgia, told the Washington Examiner.

The $9.4 million that Lawrence & Bundy received accounts for over 37% of the roughly $25 million in legal fees that Fair Fight Action has racked up in the past two years, according to Politico, which first reported on the payments to Lawrence-Hardy’s law firm.

Fair Fight Action raised over $61 million in 2019 and 2020 after being founded in 2018. At least one-third of that money has gone toward the lawsuit against Raffensperger, while $20 million has been put in cash reserves, tax records show. While there are eight separate law firms that worked on the case against the secretary of state, Lawrence & Bundy has earned the most in fees.

“We do provide other services for Fair Fight Action,” Lawrence-Hardy told Politico. “We have several matters for them.”

Abrams and Lawrence-Hardy were classmates together at Georgia’s Spelman College, and Abrams graduated from Yale Law School three years after Lawrence-Hardy. The fact that Fair Fight Action and Lawrence-Hardy have operated together in a working capacity presents a “clear conflict of interest,” according to Craig Holman, government affairs lobbyist for the left-wing think tank Public Citizen.

“The outcome of that litigation can directly affect her campaign itself,” Holman told Politico.

Abrams’s campaign did not respond to a request for comment, nor did Lawrence & Bundy, Fair Fight Action PAC, or Lawrence-Hardy herself.