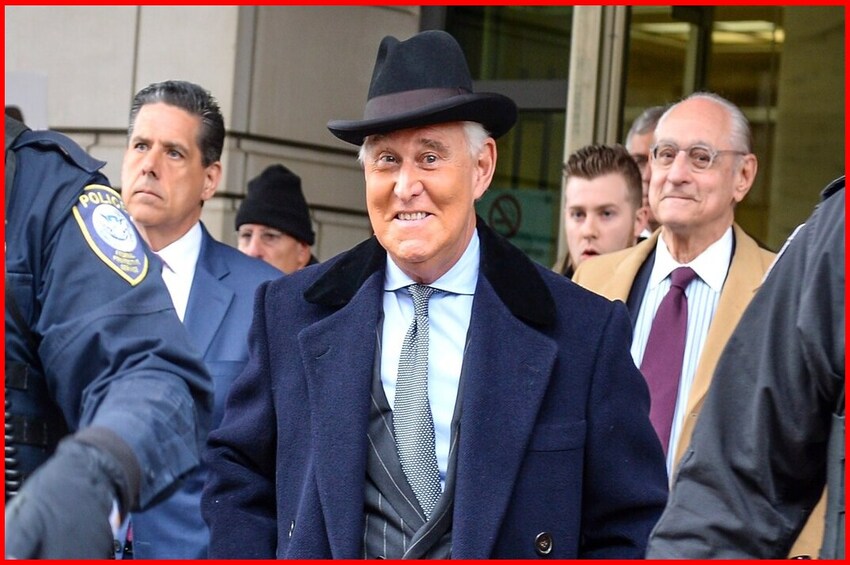 But the Democrats are cooking up an even weaker sequel

In the sequel, you’re asked to believe that Putin is manipulating the chesspieces to steal a second term for President Trump – somehow preferring an incumbent who beefs up the U.S. armed forces, pressures NATO allies to beef up theirs, imposes painful sanctions on Moscow, provides lethal aid to Ukraine, ramps up U.S. energy production, and seeks to thwart the Kremlin’s coveted natural-gas partnership with Germany, over an unabashed socialist who honeymooned in the Soviet Union and whose policies would wreck the American economy, end the resurgence of American energy production, and hollow out the American armed forces.

Stone was sentenced to 40 months’ imprisonment. This was smack in the middle of the federal sentencing guidelines’ range — 37 to 46 months — that Attorney General Bill Barr’s Justice Department argued would be a reasonable term. The AG’s position was a second-guess of the Stone trial’s prosecutors. That team, dominated by Mueller fabulists who portrayed the Stone case as Watergate revisited, had recommended something closer to a nine-year sentence.

The severity of the trial team’s recommendation was objectively absurd. It was, more to the point, merely a recommendation — as was Barr’s milder but still stiff counter. It had no legally binding effect whatsoever on the judge. In federal law, as interpreted by the Supreme Court, the judge decides the sentence. Not only is the sentencing court free to ignore any recommendation from prosecutors, which judges do with frequency; the court is free to ignore the guidelines — the regime Congress introduced in the 1980s in a (moderately successful) effort to end obscene disparities in sentences imposed on similarly situated defendants.

Nevertheless, Barr’s entirely reasonable position was castigated by Democrats, their media notetakers, and progressive lawyers who have transformed the organized bar into just another left-wing hack. These last included a couple thousand former federal prosecutors and Justice Department officials, who took a break from writing donation checks for their favorite Democratic demagogues to sign a petition demanding Barr’s resignation — strangely silent, though they were, when Obama AG Eric Holder was being held in contempt for misleading and obstructing Congress’s investigation of the Fast & Furious scandal, in which the murder of a U.S. Border Patrol officer was just part of the lethal fallout from the Obama Justice Department’s reckless gun-walking scheme.

A Democratic presidential aspirant, Senator Elizabeth Warren, trained up for her ruthless Bloomberg bashing by, of course, calling for Barr’s impeachment.

Understand: There was nothing to this. It was a total fabrication. The partisans behind this frippery knew full well that the Justice Department’s submissions had no legal effect. Barr could not have slashed Stone’s sentence even if he wanted to. The sentence was always going to be imposed by Judge Amy Berman Jackson. She, like federal judges across the country, is just as steeped in sentencing law as Justice Department lawyers. Judges, as Jackson demonstrated at Stone’s hearing on Thursday, have very strong feelings about the guidelines, based on study and the need to grapple with them almost daily.

Moreover, in every sentencing case, judges get guidelines calculations from the court-administered Probation Department, as well as from the defendant’s counsel. They don’t need the prosecutor to tell them what either the law or their authority to apply it is.

Not only are they intimately aware of these things; the brute fact is that sending another human being to prison is the hardest thing judges have to do. No matter how loathsome the defendant is, there are almost always other lives — those of children, spouses, parents, loved ones, business associates — that are damaged by a sentence of incarceration. We in the peanut gallery get to bloviate about sentences, but then we go on with our day. Judges agonize over them. It is personal and stressful. They listen respectfully, but they don’t let a prosecutor or anyone else tell them what to do. They analyze potential sentences from every angle, and still worry, even years later, whether the calls they’ve made were the right ones for all concerned.

It was a slander to claim that Barr was doing Trump’s bidding. The president wants Stone’s case to disappear. Barr, to the contrary, held firm that the seven felony convictions were righteous, and urged that a sentence of between three and four years for an elderly first-offender would be appropriate. And then he publicly protested against the president’s tweeting about pending criminal cases and investigations, because such commentary undermines the Justice Department’s mission.

Barr’s Justice Department acknowledged that the trial prosecutors’ construction of the guidelines was literally correct, including their factoring of a guidelines enhancement that would have inflated Stone’s sentence drastically. The Justice Department, however, contended that the prosecutors’ guidelines calculation was ultimately unreasonable because it was out of proportion with the gravity of the offense. In the end, Judge Jackson drew the same conclusion. Though her guidelines path to 40 months was somewhat different from DOJ’s, she came out in the same place — because 40 months, no matter how you get there, is reasonable . . . even if Senator Warren would have you think it’s impeachable.

Of course, this would not be the Russia probe if Trump antagonists were not peddling the collusion narrative. So Judge Jackson couldn’t resist. Stone, she inveighed at Thursday’s hearing, was not prosecuted “for standing up to the president,” as his apologists maintain; no, “he was prosecuted for covering up for the president.”

Covering up what? That the Trump campaign might have been hoping that an outside source like WikiLeaks might be planning to leak damaging information about an opponent, just as the Clinton campaign was giddy when someone leaked Trump’s tax information to the New York Times?

So what? That wasn’t the collusion narrative. What the media-Democrat complex purported was that Trump conspired with Russia to hack Democratic emails in order to hurt Clinton and swing the election to Trump. If anything, the Stone case demonstrated, yet again, that there was no Trump–Russia conspiracy — if there had been, the hapless Stone would not have been beating the bushes for clues about what WikiLeaks was up to.

Judge Jackson is too smart not to know that when she pregnantly claims Stone was “covering up for the president,” that will be twisted into a suggestion — from a federal court, no less — that there really was Trump–Russia collusion. No wonder the judge had such praise for the trial prosecutors. She was taking a page out of the Mueller playbook.

The Mueller prosecutors knew they had no evidence of a Kremlin–Trump conspiracy. The indictments they filed against Russian actors elucidate that Moscow neither needed nor wanted American collaborators. But the politicized probe featured the Mueller two-step: First, charge process crimes against such saps as Stone, George Papadopoulos, and Michael Flynn; then, rather than writing concise charges, as prosecutors typically do in such mundane cases, exploit the opportunity to craft extravagant collusion narratives. In each indictment, we’re treated to pages and pages of big wind about Russians and WikiLeaks and emails; then, you flip to the end only to find that there’s no rain — somebody lied about the date of a meeting, or threatened a dog, or just did his job as incoming national-security adviser.

And now we’re on to Russia Collusion II. Already it is shaping up like the original: a sprawling, incoherent, implausible mess of a plot, with a B-movie cast and the same ending — Trump gets impeached, this time probably in 2022. Another bomb, but hopefully the attorney general will stick around to see it.