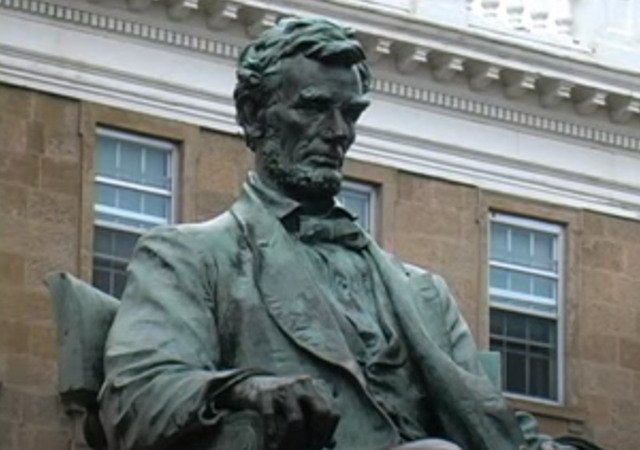 If you’re wondering where all these radical leftists in America came from, look no further than the nearest college campus.

Academia has been spoon feeding a steady diet of leftism to American students for generations.

Now they are beginning to see the fruits of their labor.

At the University of Wisconsin-Madison, students are now demanding the removal of a campus statue of Abraham Lincoln.

Remove and replace “The Lincoln Statue” from Bascom Hill

Many UW-Madison students wait to take their picture on the lap of the Abe Lincoln statue atop Bascom Hill when they graduate. However, few know how this statue got to the top of the hill, and who put it there.

A little history about the Abraham Lincoln statue sitting at the top of Bascom that many seem to know and love:

One of the primary donors is Richard Lloyd Jones. This man was well-known for holding ultra-racist beliefs. He was a journalist that wrote articles inciting violence and even murder of black people. He also published the piece that instigated the Tulsa Massacre, which devastated Black Wall Street in 1821. The other primary donor was a man named Thomas Brittingham Jr, a known member of the KKK. As for Abraham Lincoln, while his history with race relations is questionable, this statue has nothing to do with the creation and continuation of education on UW-Madison’s campus and was merely a gift of political capital.

We ask that the university consider removing the statue from Bascom and direct funding towards a new installation acknowledging the past, present and future of UW-Madison. This statue stands on sacred and stolen Ho Chunk land, and whatever stands there should not stand as a reminder of racist legacies that contributed to this campus.

This isn’t the first time students here have tried this.

This is not the only time in the history of the University of Wisconsin that the Lincoln statue has been caught in the crosshairs of protest.

In 2015, as Black Lives Matter protests engulfed the campus, members of a then-new campus group called “About Race UW” proposed the removal of the statue.

In 2016, the statue was draped in a black tarp during a racial protest by students.

In 2017, the student government approved a resolution to educate the campus community about Lincoln’s “oppression.”

In the past, campus leaders have rebuffed such demands. The College Fix this week reached out to the