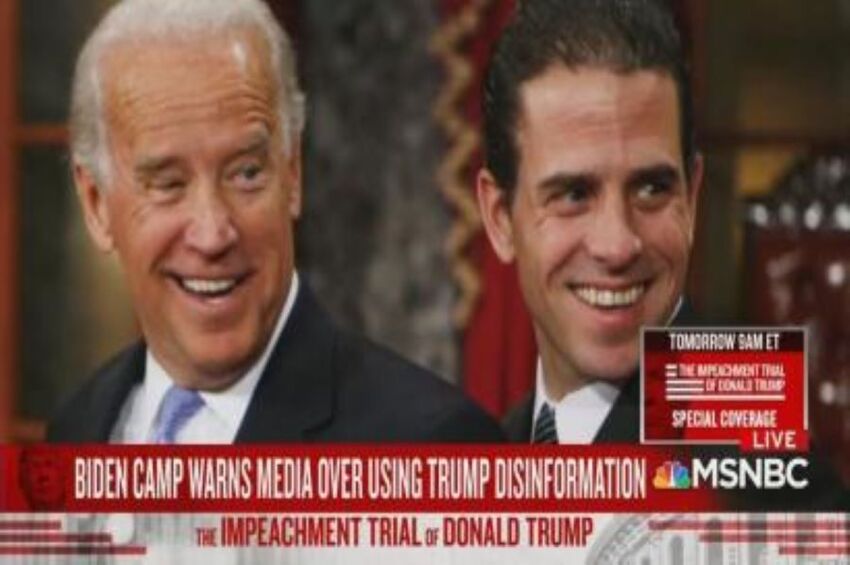 In theory, journalists would bristle at taking orders from a political campaign on how to report on something. But MSNBC on Monday has repeatedly embraced the “warning” from the Biden camp to not fall for the “debunked” “disinformation” by Senate Republicans. After Heidi Przybyla sounded like a Biden press secretary earlier in the day, host Katy Tur trumpeted, “Joe Biden’s warning to the media ahead of the President’s impeachment trial.” She seemed to appreciate the order: “In its most forceful push back yet, Joe Biden’s campaign has issued a warning to the media about disinformation on Ukraine and attacks on Hunter Biden.”

As though the “warning” from one presidential campaign to the other should be treated as objective fact, Przybyla reappeared to parrot: “It is a preemptive strike against the disinformation that is really at the heart of the President’s defense.” Regarding Senate Republicans bringing up what Hunter Biden did in relation to Ukraine,  the journalist hyped Biden talking points as news judgment: “This is a reminder, Katy, that the entire premise of the argument is debunked. It is not just unsubstantiated.”

Justifying not wanting to talk about Hunter Biden, Przybyla dismissed: “Now, ethics experts I talked to in Ukraine say it was not ethical for Hunter to trade on his father’s name and sit on the board of an energy company when he doesn’t know much about energy. But was it illegal? No.”

Again worrying about the concerns of Team Biden first, Przybyla fretted, “But there is significant concern, Katy, that as this case moves to the Senate, they will go after Hunter.”

Obviously, Donald Trump can exaggerate and misstate facts. But can anyone imagine any Republican president being able to “warn” reporters about the “debunked” arguments of his Democratic opponent?

KATY TUR: But first, Joe Biden’s warning to the media ahead of the President’s impeachment trial.

TUR: In its most forceful push back yet, Joe Biden’s campaign has issued a warning to the media about disinformation on Ukraine and attacks on Hunter Biden. This morning, the campaign released an open letter ahead of the Senate ahead of the Senate impeachment trial writing, “It is not sufficient to say the allegations are unsubstantiated or that no evidence has emerged to support them. Not only is there no evidence from Republicans main argument against the Vice President, there is a mountain of evidence that actively debunks it. And it is malpractice to ignore that truth.” Joining me now is NBC news correspondent Heidi Przybyla and former National Security Council Senior Director Ned Price. So, Heidi, what can you it he will us about what prompted this open memo?

HEIDI PRZYBYLA: Sure, Katy. Two objectives here. It is a preemptive strike against the disinformation that is really at the heart of the President’s defense. Remember, we are here because he insisted that there may be something corrupt about former Vice President Biden calling for the ouster of a former Ukrainian prosecutor general. Secondly it is a shot across the bow as this case moves from the House to the Senate, and the prospect of Senators here in the President’s legal team potentially going after Hunter Biden. This is a reminder, Katy, that the entire premise of the argument is debunked. It is not just unsubstantiated.

Number one, this corrupt Ukrainian prosecutor, his ouster was a key priority of the entire west, of the EU, of the IMF and of our own leaders here in the U.S., including Senators Rob Portman and Ron Johnson, Republicans. Number two, that corrupt Ukrainian prosecutor, who was not investigating Burisma the energy company where Hunter Biden had served at the time that Joe Biden called for his ouster. That investigation was dormant. And then number three, Hunter Biden’s service on the board took place who years after the alleged corruption that the Ukrainians were investigating took place. Now, ethics experts I talked to in Ukraine say it was not ethical for Hunter to trade on his father’s name and sit on the board of an energy company when he doesn’t know much about energy. But was it illegal? No. And so, even the prosecutor who Rudy Giuliani was trying to push into investigating this said there was nothing there and it essentially amounted to a tax violation. But there is significant concern, Katy, that as this case moves to the Senate, they will go after Hunter.

TUR: So, Matt, in the open letter, they say, Ned, I’m so sorry. In the open letter they say, “Unsubstantiated or that no evidence has emerged to support them saying those things along side the allegations is just not enough”, it’s not enough for reporters to do that. Ultimately, though, it seems to me what the White House is doing is not —  it not arguing about whether reporters call them unsubstantiated or debunked or say there was no evidence or never was any evidence to support it. They’re trying to muddy the waters and make it look dirty enough or just gross enough that whatever the President did was justified. Because it doesn’t look right to have Hunter Biden do that. Ethically it might be questionable. If they’re doing that, then don’t worry about what the President did.

NED PRICE (Former NSC Senior Director): You know, I think that’s right, Katy. I think we have to think about this episode. Everything that President Trump has attempted to do vis-a-vis Ukraine that we’ve seen come to light was really a disinformation operation. We’ve talked about disinformation and misinformation being part of Moscow’s playbook, but in this case it emanated directly from the White House. That is the fact because on July 25th in that infamous phone call, what President Trump was asking for was not a corruption investigation. He was asking for an announcement of a corruption investigation, the information. We heard that ask, and it wasn’t really asked because it was coupled with the withheld aid and White House meeting, we heard this repeated by his allies, the announcement of an investigation into Hunter Biden.

And so clearly this is what they wanted the whole time. So even as their scheme came to light, even as some of the witnesses came forward, even as the documents made clear that this was a betrayal of our national security, to my mind, the White House is still trying to make lemonade out of these lemons, by using the impeachment proceedings in the House. And now the trial in the Senate to, as you said, continue to try and muddy the waters, even though it is President Trump on trial. What President Trump and his allies, defenders are trying to do, is trying to impugn the record of Vice President —  former Vice President Joe Biden, his son, to put them on the same plane. I think what the Biden campaign was doing, wisely, was making the claim these two things are not on the same plane, same level. They’re speaking to the media, but I think also the American people to remember that as we watch these proceedings unfold in the coming days and weeks.