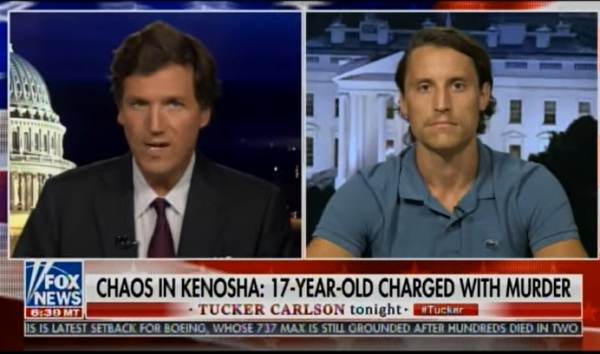 The Daily Caller’s Richie McGinniss appeared on Tucker Carlson Tonight and described hearing shots fired in Kenosha before Kyle Rittenhouse used his weapon to defend himself.

McGinniss was just feet away when the shooting occurred.

McGinniss told Carlson that he was just ten to twelve feet behind the rioters as they ran into the parking lot to charge Rittenhouse.

The reporter noted that it is not clear if that gunshot was fired into the air or towards Rittenhouse, but the teenage boy did turn around immediately after that.

“At that point he went from running away to aiming his weapon at Rosenbaum and I was actually directly behind Rosenbaum.”

Rosembaum was one of the men shot and killed by Rittenhouse.

“I took one or two steps to my right, right as Rosenbaum was lunging for the barrel of the rifle,” McGinniss explained.

The reporter recounted that Rittenhouse actually moved the barrel of the rifle to dodge Rosembaum’s attempt to grab it. At this point, the attacker began to fall and Rittenhouse fired four shots.

McGinniss said that at this point he attempted to provide whatever aid he could to Rosembaum, because he had just been shot. He said that he believed Rittenhouse had ran away, but that he had came back and pulled out his phone to call 9-1-1.

As the Gateway Pundit reported earlier on Friday, Rittenhouse was in Kenosha working as a lifeguard at the community pool prior to going to help clean vandalism off the local high school.

This simple fact destroys the narrative being peddled by the mainstream media that he had “crossed state lines” to harm the rioters.

In a statement by Rittenhouse’s legal team at Pierce Bainbridge, provided to the Gateway Pundit, “after Kyle finished his work that day as a community lifeguard in Kenosha, he wanted to help clean up some of the damage, so he and a friend went to the local public high school to remove graffiti by rioters.”

Additionally, the weapon Rittenhouse was using to protect himself and others never crossed state lines.

“Later in the day, they received information about a call for help from a local business owner, whose downtown Kenosha auto dealership was largely destroyed by mob violence,” the statement continues. “Business owner needed help to protect