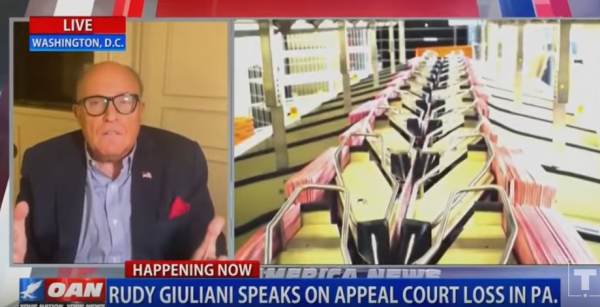 Rudy Giuliani spoke with OAN this evening after receiving word from the Pennsylvania Circuit Court that the President’s case has been denied.

The Third Circuit Court of Appeals on Monday granted an expedited review for Team Trump’s appeal in Pennsylvania after an Obama judge dismissed their lawsuit seeking to block the state from certifying its election results.

Trump’s campaign on Friday lost its appeal in the Third Circuit Court of Appeals.

A three-panel judge (all appointed by Republican presidents) said that the Trump campaign’s “claims have no merit.”

“The activist judicial machinery in Pennsylvania continues to cover up the allegations of massive fraud,” Ellis said.

“On to SCOTUS!”  she said referring to the US Supreme Court.

@RudyGiuliani and me on Third Circuit’s opinion:

The activist judicial machinery in Pennsylvania continues to cover up the allegations of massive fraud.

We are very thankful to have had the opportunity to present proof and the facts to the PA state legislature.

President Trump was ahead of Joe Biden in Pennsylvania on election night by 700,000 votes.

Crooked and corrupt elections officials in Pennsylvania and Pittsburgh stopped counting votes on election night after the polls closed because Biden was getting absolutely crushed by President Trump.

Suddenly massive ballot dumps only for Joe Biden appeared and huge spikes of Biden votes were seen added to the election results.

Then Republicans were not permitted to observe the review and count of the hundreds of thousands of ballots that came in after the election was over.

Tonight Rudy was OAN and he shared the following:

The Democrats are lying.  I don’t know about the judges, why they shy away from the fact that the allegations are quite specific.  The complaint is 30 pages long.  I invite you to read it.  It has the names of the people making the allegations.  It tells you what they saw.  It tells you that they were seeing ballots that were being forged.  They saw ballots that were being counted four or five times.   These are about as specific as allegations can get.  So I don’t know if it’s and excuse to stay away from a hard case or who knows.  The reality is they’re not going to get away with it because if we can’t do it in court, we’ll do it