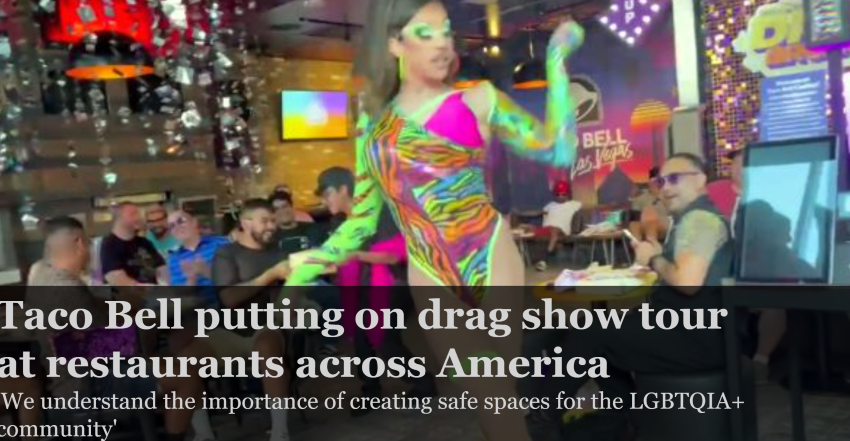 By Grant Atkinson, The Western Journal
Published May 7, 2022

Taco Bell has long been known to make customers’ stomachs churn, but the restaurant chain’s latest announcement may cause nausea for an entirely different reason.

According to The Washington Times, Taco Bell has launched a “Drag Brunch Tour” that will make its way to five cities across America.

The tour will feature drag queens performing at the various Taco Bell Cantina locations. Customers can purchase a new $5 breakfast box, Cinnabon Delights and mimosas during the events.

According to a news release on Taco Bell’s website, each “Drag Brunch” will be hosted by professional cross-dresser Kay Sedia. Local drag queens will also perform in each city.

The first event of the tour was held on Sunday in Las Vegas, Nevada.

Will you boycott Taco Bell?

The tour is set to continue on May 22 in Chicago, Illinois. It well then move on to Nashville, Tennessee; New York City and Fort Lauderdale, Florida.

“We understand the importance of creating safe spaces for the LGBTQIA+ community and are thrilled to provide a unique experience that spotlights and celebrates the wonderful artform of drag and its influence in culture with their chosen families,” Taco Bell Global Chief Brand Officer Sean Tresvant said.

The tour is in collaboration with the It Gets Better Project, whose stated mission is “to uplift, empower, and connect lesbian, gay, bisexual, transgender, and queer (LGBTQ+) youth around the globe.”

“What started nearly twelve years ago as an effort to provide hope and encouragement to young LGBTQ+ people has become a global movement to uplift and empower queer youth before they’re in crisis,” It Gets Better Project Executive Director Brain Wenke.

“We are beyond excited to partner with Taco Bell and the Taco Bell Foundation to celebrate the LGBTQ+ community through the Drag Brunch experience and to collaborate on programming designed to engage LGBTQ+ youth around their career aspirations and future potential.”

While it is true that no child deserves to feel depressed or suicidal, they also should not be told this behavior is normal. Men dressing up as women is not normal or appropriate for anyone to celebrate, especially not children.

Taco Bell did say reservations for the event are reserved for those 18 and up, so young children will not have to see this madness. Still, behavior like this from grown adults is not something to be praised.

Jesus made it clear in the Bible that everyone deserves love, even if they are engaged in sin. However, loving someone does not mean condoning their sin, but rather guiding them toward a Christ-centered life.

Beyond the ethical concerns of these brunches, Troy University Business School Associate Dean Allen Mendenhall told the The Washington Times they may hurt Taco Bell financially.

“Conservative populism is on the rise around the globe, so adopting left-leaning views or policies is risky for business,” Mendenhall said.

All of these concerns together make the “Drag Brunch Tour” a repulsive plan rivaled only by Taco Bell’s own cuisine.

This article appeared originally on The Western Journal.