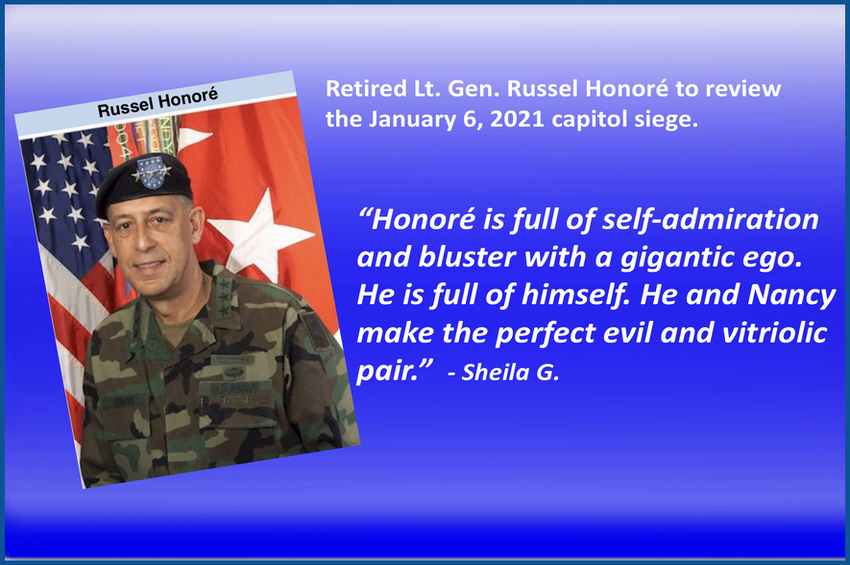 We have all heard the words by the Democrat party calling for unity. However, those words certainly do not match their actions.

We have Rep Linda Sanchez sponsoring the No Glory for Hate bill, denying certain privileges for Presidents who were impeached two or more times. It doesn’t matter if those impeachments resulted in no conviction.

Then we have our nation’s most evil and vitriolic woman, Nancy Pelosi, calling for Retired Lt. Gen. Russel Honoré to review the January 6, 2021 capitol siege. Hostile, cruel, malicious, and vitriolic Nancy Pelosi has now failed twice in getting President Trump’s conviction, and now she has decided to put together a commission to write a report on the January 6th riot in Washington D.C.

He called Senator Josh Hawley “a rolled up piece of shit. This little peace of shit with his @Yale law degree should be run out of DC and disbarred ASAP. These @Yale and @Harvard law grads is high order white privilege.”  Revealing yes.  Honoré just demonstrated is doesn’t like white people.  He is a racist.

Senator Johnson pointed to a Fox News article from last July where Honoré stated to MSNBC that then-acting Homeland Security Secretary Chad Wolf needs “to be run out of Washington” due to what he called “bullshit” tactics used by federal agents to contain mobs in Portland, Oregon, amid unrest in the city.

On January 7, 2021, Honoré speculated that those in charge of security at the Capitol could have been “complicit” in the attack: “By a percentage, 30 to 40 percent of the officers are Trumpsters. That’s a fact Jack”. On the same day he called for a boycott of companies advertising on Fox News, claiming that Sean Hannity is a Russian asset: “These are Sean Hannity’s leading advertisers. PLEASE stop buying their shit stocks Sean Hannity speaks #Russian iNFO OPERATIONS TO SUCK UP TO #45”

On August 31, 2005, Honoré was designated commander of Joint Task Force Katrina, responsible for coordinating military relief efforts for Hurricane Katrina-affected areas across the Gulf  Coast. Honoré’s arrival in New Orleans came after what was widely believed to be a poor performance by the state and local agencies and the Federal Emergency Management Agency (FEMA), and its director Michael D. Brown.

He gained media celebrity and accolades for his apparent turning around of the situation in the city as well as his gruff management style which contrasted with what many felt were the empty platitudes of civilian officials. In one widely played clip,  Honoré was seen on the streets of the city, barking orders to subordinates and, in one case, berating local police officers who were displaying  their weapons as they rode past him. “Weapons down! Weapons down, damn it!” Honoré shouted. New Orleans Mayor Ray Nagin was quoted on a radio interview September 1, 2005, saying: “Now, I will tell you this—and I give the president some credit on this—he sent one John Wayne dude down here that can get some stuff done, and his name is Gen. Honoré. And he came off the doggone chopper, and he started cussing, and people started moving.

John Wayne – no way. But keep in mind that came from Nagin who ended up doing time for his corruption. I have been to New Orleans many, many times. The people who live there, who were trapped, the survivors of family members who died tell a very different story.

After Hurricane Maria devastated Puerto Rico in 2017, Honoré described the situation in the U.S. territory as being “like a war” and said it was significantly worse than New Orleans in the aftermath of Katrina. Honoré criticized the Trump administration’s response to the crisis, saying it demanded a greater and more rapid response, with a larger commitment of U.S. troops to provide emergency assistance, and told CNN anchor Erin Burnett, “The president has shown again he don’t give a damn about poor people. He doesn’t give a damn about people of color.”  Again, Honoré proves he is the racist.

I couldn’t disagree more with this big mouth. We all need to remember that the government in Puerto Rico is corrupt. It always has been and always will be. Puerto Rico’s electrical grid was in a shambles before the hurricane because those with the Puerto Rican government pocketed our taxpayer money rather than investing in their electrical grid. Neither the Puerto Rican government nor the Mayor of San Juan have any disaster preparedness plan. My nephew spent months in San Juan coordinating the distribution of fuel. His crew found a warehouse full of undelivered supplies – food, water, diapers. It had been in the warehouse for a month. Puerto Rico and its largest city, San Juan, did not have any sort of plan. Where were the city and state workers? Where was the governor and mayor?

In late August 2009, there were reports that Honoré would run for U.S. Senate in 2010 in his native Louisiana as a Republican against incumbent Republican Senator David Vitter. On August 31, when asked point-blank on CNN  about the reports, Honoré expressed admiration for individuals who aspire to serve in public office but said that he had no plans to seek the Senate seat, as he was unlikely to win with the viewpoints he currently holds.

Thank goodness he didn’t run. We do not need another Democrat winning on a Republican ticket.

On January 15, 2021, Speaker of the House, Nancy Pelosi announced that Honoré would lead a review of security failures following the 2021 storming of the United State Capitol that will focus on “security infrastructure, interagency processes and procedures, and command and control”. On February 17, 2021, Sen. Ron Johnson (R-WI) criticized the Honoré appointment: “General Honoré is an extreme partisan and should be the LAST person to head up an investigation of what happened at the Capitol on January 6.”

In my view, Honoré is full of self-admiration and bluster with a gigantic ego. He is full of himself. He and Nancy make the perfect evil and vitriolic pair. Do we need a commission to recommend security changes at the Capitol? No. Not until evil Nancy answers the hundred million dollar question on the table -why did she turn down additional security?

Listen to Pelosi make the announcement

You can follow me Gab, Parler and Telegram @TheSheilaG2020.