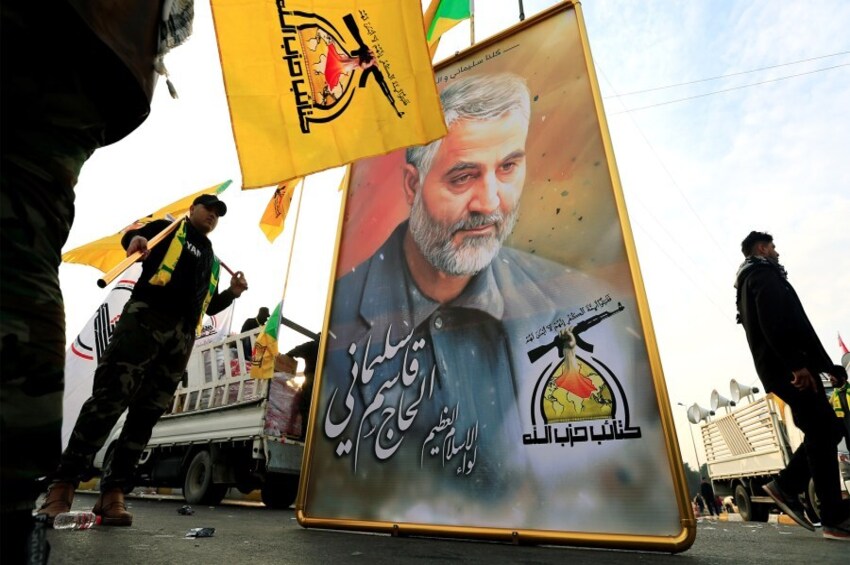 Kataib Hezbollah Iraqi militia hold a picture of Qassem Soleimani as they gather ahead of the funeral of the Iraqi militia commander Abu Mahdi al-Muhandis in Baghdad, Iraq, January 4, 2020. (Thaier al-Sudani/Reuters)

It’s legal to kill an enemy in combat, and Soleimani was clearly escalating his attacks on U.S. forces.

In ordering a strike on Iranian general Qasem Soleimani, President Donald Trump re-opened questions about targeting those abroad who would harm Americans. “No one should shed a tear,” in Senator Chuck Schumer’s words, over the death of the Qods Force leader, who was responsible for the killing of hundreds of American soldiers in Iraq. Nevertheless, critics worry that the killing of Soleimani, one of the military leaders closest to Iran’s religious leaders, could spark an escalatory spiral of attacks and lead to a broader war in the Middle East.

Putting aside the policy of the attacks, Trump critics have raised doubts about the legality of the strike. Shortly after news broke on Thursday night of the attack, Senator Chris Murphy (D., Conn.), while conceding that Soleimani was “an enemy of the United States,” tweeted: “The question is this — as reports suggest, did America just assassinate, without any congressional authorization, the second most powerful person in Iran, knowingly setting off a potential massive regional war?”

Conservatives also raise questions about the legality of the strikes. NR’s Kevin Williamson, for example, remains doubtful about whether President Trump could order Soleimani’s killing unilaterally. He concedes that Congress may have authorized the president to use force back in the 2002 Authorization to Use Military Force (AUMF), in which Congress approved the Iraq War, or even the 2001 AUMF, which granted the president the power to use force against anyone involved with the 9/11 attacks. Though these authorizations took place long ago, the terms of the two laws are sweeping and are not limited by time — in the interests of full disclosure, I helped draft both of them as a Bush Justice Department official. Williamson at least concedes that “the administration’s case here is not obviously implausible.” But he also calls on Pelosi to take the “long overdue” step of repealing both AUMFs and replacing them with a new “instrument that is much more narrowly tailored and takes into account the current political and security realities.”

These Trump critics have the law wrong. As the Trump administration has suggested, the AUMFs provide legal cover for the Soleimani strike. But even if they didn’t, or even if Congress had repealed them, the Constitution would still provide the president with sufficient authority to use force to prevent a future attack on American troops, personnel, or facilities abroad.

The legal difficulty is not posed by the use of force to kill Soleimani individually, as opposed to attacking less specific Iranian targets. The United States has long had a policy of using targeted strikes to kill enemy leaders. After the 9/11 attacks, the Bush administration launched a program of drone strikes and Special Forces attacks to kill leaders of al-Qaeda and insurgent groups in Iraq and Afghanistan. Not only did Barack Obama continue these policies, he also launched an air war against Libya that sought as one of its goals to kill its leader, Moammar Qaddafi, in order to trigger regime change. Few, if any, Democratic officials criticized Obama for engaging in illegal assassination or for launching strikes in Libya or, later, in Syria, without congressional approval.

But even if opponents of the Trump administration based their criticisms on constitutional principle, and not political expediency, they would still fail. Killing an individual, of course, is not generally legal. Nor is it always illegal. Killing an individual can be legal when it is carried out by the state as criminal punishment for first-degree murder. It can be legal when a police officer shoots an attacker armed with a weapon. It can be illegal when it is murder.

No American law prohibits the targeting of specific enemy leaders. Neither the Constitution nor federal statutes prevent the direct targeting of individual members of the enemy. Only Executive Order 12,333, issued by President Reagan in 1981, states that “no person employed or acting on behalf of the United States Government shall engage in, or conspire to engage in, assassination.” This was a continuation of a similar ban first issued by President Gerald Ford in 1976, which was subsequently reaffirmed by President Carter, and has been followed by every president since.

But while he banned assassinations, Reagan did not define them. Ever since Reagan’s executive order, administrations of both parties have generally defined assassination as the murder of a public figure for political purposes. The killings of Martin Luther King Jr., John F. Kennedy, and Abraham Lincoln were assassinations. By contrast, the killing of the enemy in combat is protected by the laws of war. As Hugo Grotius, the father of modern international law, observed in 1646, “it is permissible to kill an enemy.” Legitimate military targets include not just foot soldiers, but the command-and-control structure of an enemy’s military, leading up to its commander in chief. Assassination is different from killing an enemy general, such as Soleimani.

Critics such as Senator Murphy further imply that Soleimani did not constitute a legitimate military target because Trump did not seek congressional approval for any war with Iran. This criticism also misunderstands the law. As a matter of constitutional law, President Trump did not need congressional approval to strike Soleimani or any other Iranian military officer involved with planning or carrying out attacks on our embassy in Baghdad or other U.S. personnel and forces in the region. Scholars have argued for decades over whether Congress must give its authorization, because of its power under the Constitution to declare war, before the president can use force abroad. I’ve long taken the view that the president need not receive legislative approval or a declaration of war first, but that Congress can also use its powers to raise the Army and Navy and to fund (and not fund) the military to check the president. Congress can cut off funds for any conflict, or even refuse to grant them in the first place, as it eventually did in Vietnam. It can structure a military to make presidential adventurism less likely, such as reducing the numbers of offensive military forces designed to fight abroad and refocusing the military on defensive systems.

But where we come out on Congress’s power to declare war does not matter. Even those who take the broadest view of Congress’s war powers admit that the president need not wait for legislative approval when the United States acts in self-defense. During the Constitutional Convention, the delegates changed the initial draft’s grant to Congress of the power “to make war” to its current “to declare war.” James Madison and Elbridge Gerry supported this change for “leaving to the Executive the power to repel sudden attacks.” While I disagree with scholars who believe that Congress’s power to declare war gives it the sole authority to decide to start a war — in my view, the history shows instead that the power to declare war was the power to decide on the legal status of different levels of hostilities between nations — all agree that Congress need not declare a war when the United States responds with force in self-defense.

Whether killing Soleimani amounted to valid self-defense would raise difficult factual questions if the United States were acting in a purely anticipatory manner. The United States and other countries have recognized that a nation can use force to preempt an imminent attack by an enemy. President Kennedy, for example, stretched the doctrine of anticipatory self-defense perhaps to its limits when he imposed a naval blockade during the 1962 Cuban Missile Crisis to prevent Soviet deployment of nuclear missiles on an island just 100 miles from Florida. Whether the United States could attack Soleimani in anticipatory self-defense would depend on the facts: whether Iranian forces under his control were planning or in the middle of an attack on U.S. forces or installations.

But in this case, the events of the last few weeks make Trump’s legal case all the easier. Iran had already begun attacking U.S. personnel. It supported militias that had already shelled a U.S. base in Iraq, an assault that killed one defense contractor and injured several U.S. soldiers. It had ordered its militias to storm the U.S. Embassy. With access to extensive electronic and human intelligence, the Trump administration could conclude that Soleimani and his associates were planning yet further attacks on American forces. Soleimani had, after all, planned the devastating campaign against U.S. forces during the Iraq occupation, provided support for Hezbollah and other terrorist groups that have lethally attacked American troops in the Middle East, and devised the Iranian drone strike on Saudi Arabia’s oil facilities.

President Trump could choose to make public the intelligence to prove that Soleimani and his associates were continuing further attacks on Americans. But he need not, as the immediate historical record already reveals the Iranian general’s intentions to harm American personnel and installations. Instead of worrying about his constitutional authority, Trump would do better to explain to the American people the broader strategy toward Iran and how the killing of an old, implacable enemy in Soleimani will succeed in deterring, rather than triggering, a broader war with Iran.