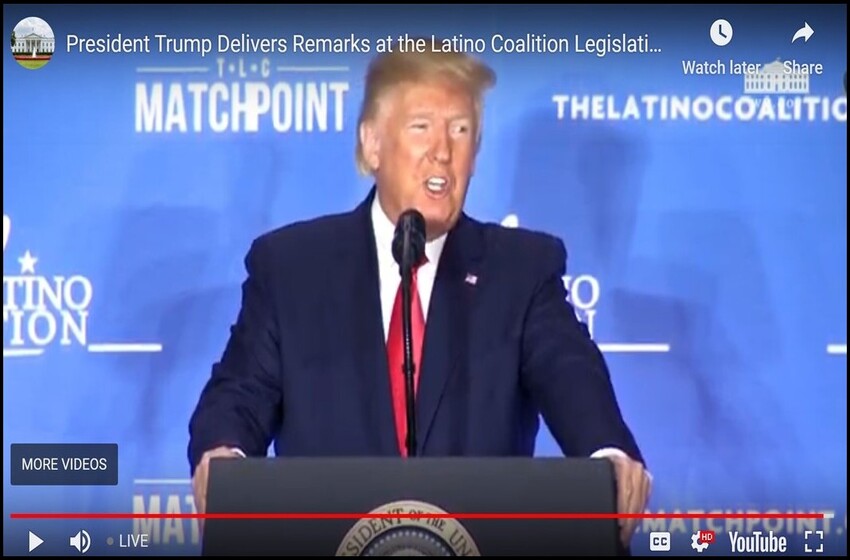 President Trump addressed the nation from the Rose Garden this afternoon. In a sober, calm, and highly organized presentation involving eleven presenters, the path forward for America’s fight against the Chinese coronavirus (COVID-19) was elucidated.

Trump started with the young history of the virus in the U.S, identifying the early designation of infected countries and limitation of travel beginning in January as crucial to the relatively low number of cases we’ve seen thus far. “Through a collective action and shared sacrifice,” he said, we have limited community spread.

The first big announcement was the suspension of entry of foreign nationals who have been to Europe in the past 14 days, and asking them to self-quarantine for 14 days.

“As the World Health Organization confirmed today, many of the things we said are 100 percent correct,” Trump repeated. “Like our earlier designation with China, that saved a lot of lives.”

Next, the declaration itself. “I am officially declaring a national emergency,” said the president. Addressing the pre-existing regulations governing national medical emergencies, he said, “We had some old rules…we’re breaking them down now.” $50 billion was declared ready for states and hospitals to enact emergency plans, and the Secretary of Health and Human Services was granted maximum flexibility in response efforts.

The president mentioned TeleHealth, a technological intermediary between large city hospitals and their rural counterparts, as a way to assess treatment, waive regulations that restrict what smaller hospitals can do regarding number of sick beds and length of stay.

“No expense shall be spared, none whatsoever,” Trump stated, as it relates to implementation of the emergency plan. Get tested, he urged, “but only if you have certain symptoms.”

Half a million additional tests will be available next week, he said, and “up to 1.4 million tests total…and 5 million tests next month, though we won’t need that many.”

The next major announcement had to do with how tests will be administered: a drive-thru model similar to what South Korea has successfully implemented, using parking lot space in major retail chain locations around the country.

The image below illustrates the broad strokes of the plan. First, go to coronavirus.gov to enter your symptoms. Next, if the symptoms are deemed test-worthy, the patient is directed to a nearby drive-thru location for testing. Results are conveyed online, thereby eliminating the need for potentially dangerous visits to hospitals.

“Google has 1,700 engineers working on this right now,” the president reassured. “This will pass…we’re going to be stronger for it. A tremendous amount has been learned.”

An impressive group of public and private sector CEOs and officers then addressed the crowd. First was Deborah Birx, Coronavirus Response Coordinator. She praised the efforts of companies such as Roche Laboratories, LabCorp and Quest Diagnostics in planning for the production and processing of test results.

“I understand that this kind of behind the scenes action of the last couple of weeks is invisible to the public,” Birx said, “but a tremendous amount has been accomplished in a short time.”

Dr. Anthony Fauci of the National Institutes of Health was next. He addressed the deregulation of the emergency, and how valuable it was to have constraints removed to tackle the spread of the virus. We need “containment and mitigation…we want to contain that curve. What’s going on here today is going to help it end sooner than it would have.”

Doug McMillon, CEO of Walmart, was next to the microphone. He detailed how Walmart was designating space in all necessary Walmart parking lots for drive-thru testing.

The CEOs of Walgreens and Target followed suit with brief addresses. Brian Cornell of Target said, “Normally we look at each other as competitors, but today, we have a common competitor [in coronavirus].”

Senior officers of Quest Diagnostics, Roche Laboratories, Signify Health (a house call provider for vulnerable patients), LabCorp, and CVS took the stage to express their support for, and praise of, the emergency plan. One of them bumped forearms with Trump instead of shaking hands, earning a compliment: “That’s good, I like that,” said Trump.

The president took the stage again, using a related question to convey that the U.S. is using the current crash in oil prices to fill up US strategic reserves “right to the top. We’re buying it at the right price.”

Head of the coronavirus task force, Vice President Mike Pence, then addressed the crowd. “This day should be an inspiration to every American,” he said. “You have forged a seamless partnership with every state.” Pence praised the public and private partnership, and recalled how Trump had called for “all hands on deck” at the outset of the outbreak. “Mr. President, we have laid the foundation to meet that need…it’s all a result of you bringing together…all the resources of the country.”

Pence mentioned that the virus has been diagnosed in 46 states, and highlighted the most vulnerable patients, seniors with chronic conditions. “Together we’ll get through this, and together, we’ll put the health of America first,” he concluded.

Seema Verma, Head of Centers for Medicare and Medicaid, followed Pence. She thanked the president for the emergency designation, as it frees up the agencies’ ability to meet new and unusual demands.

Trump took over again, stating, “All Americans have a role to play in defeating this virus.” He named the website that is the first step toward receiving a test (see screenshot below).

Trump concluded his prepared remarks, stating, “The spirit of the will of our nation is unbreakable…with faith, and heart, and hope, and love, and determination, we will get through this.”

Reporters posed a number of questions. Trump’s proximity to Brazilian President Bolsonaro, a staffer of whom tested positive for coronavirus, was a popular topic. “Bolsonaro doesn’t have it” was Trump’s simple reply. “I don’t have any symptoms whatsoever,” he said of himself. A reporter asked, “Are you being selfish by not getting tested?” he replied, “I’ll be getting tested, but not for that reason [proximity to Bolsonaro].”

Trump cast aspersions on the handling of the swine flu when questions arose about the speed of response to the coronavirus. “Very poor job” was Trump’s summary judgment. Regarding potentially expanding the Euro travel ban to include the U.K., he said, “Based on the numbers we’re seeing, we may have to include them.”

Regarding sharing data with President Xi of China and Prime Minister Trudeau of Canada, Trump was transparent, saying that the administration was in contact with all relevant countries.

It was a strong showing for Trump. Not his most charismatic or energetic, but serious and sober given the weight of the subject matter, he was certainly presidential. The plan laid out is ambitious, but given the players from the private sector, some of the most successful retailers, drug companies, and medical labs in the nation, a degree of confidence suffused the presentation.

This team isn’t going to fail the American people. They have skin in the game.