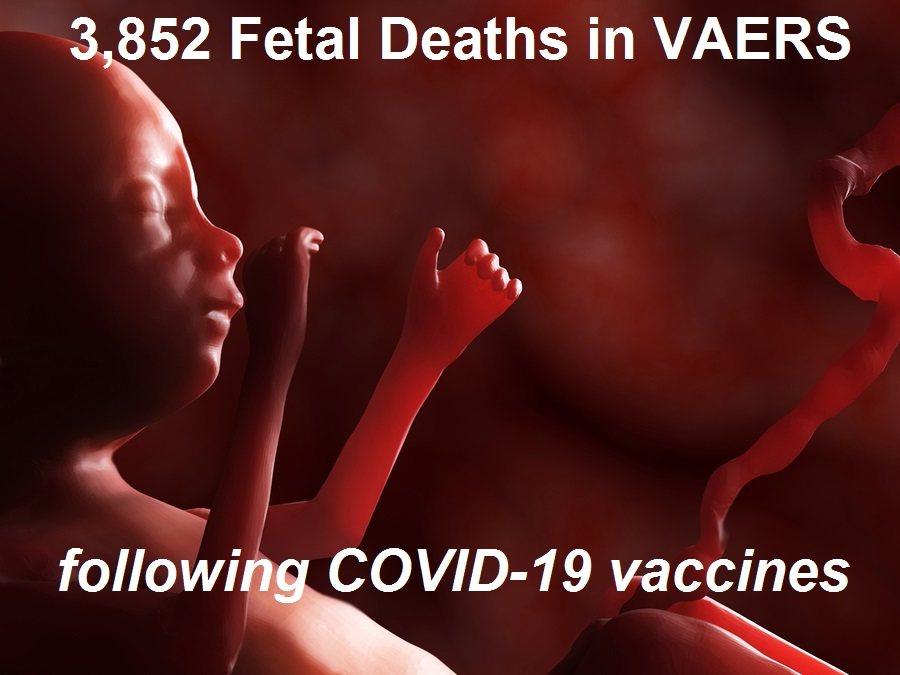 The U.S. Government’s Vaccine Adverse Events Reporting System (VAERS) database was updated this past Friday, March 11, 2022, and it is now reporting that there have been 1,168,894 cases of injuries and deaths following COVID-19 vaccines since December of 2020, when the FDA issued emergency use authorizations for the COVID-19 vaccines. (Source.)

By way of contrast, there were 926,031 cases of injuries and deaths following all FDA-approved vaccines for the previous 30+ years, from 1990 through November of 2020. (Source.) 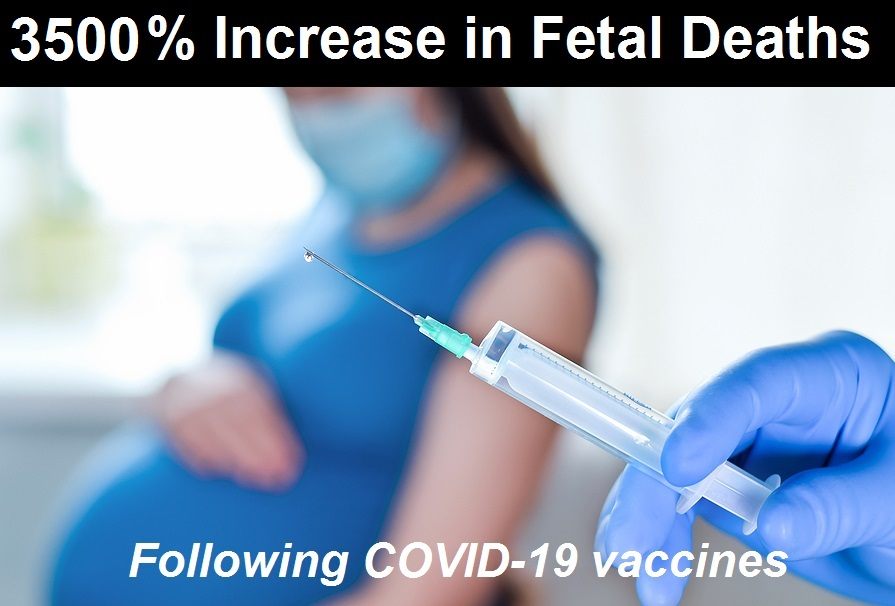 This most recent update of VAERS shows that there have now been 3,852 fetal deaths following COVID-19 vaccines. (Source.)

To arrive at the number of fetal deaths recorded in VAERS I tested several different searches on listed “symptoms” and then checked to see if the search results documented fetal deaths, since there is no demographic for “fetal deaths.”

The following is the current list of “symptoms” in VAERS that reveals fetal deaths:

Using this search for all FDA-approved vaccines for the previous 30+ years before the COVID-19 vaccines were given emergency use authorization in December of 2020, we find 2,550 fetal deaths, the vast majority of which followed vaccines produced by Merck, which would include the Gardasil vaccines. (Source.)

Here are the yearly averages then according to VAERS:

And still, I have not seen one single source in the Alternative Media report on these statistics (although a few of them have picked up our articles on the topic.)

Is it because they are afraid to cite us as a source for coming up with these search parameters, due to the fact that we also report the truth on pro-vaccine Donald Trump, and the pro-vaccine superstar doctors, which would upset their reader base and supporters?

Is that why these statistics are censored in the Alternative Media? If so, then you all have blood on your hands, because you are withholding what could be life-saving information to help a pregnant woman or child-bearing age woman make an informed decision about whether or not to receive one of these shots.

I don’t need any credit or links back for this information to be published! Do your own searches and report the same thing if you don’t want to be associated with us. There’s no ego here, and I do not earn any money from publishing these statistics.

This is about informed consent, and giving the public the statistics from the U.S. Government’s own database to have the data one needs to make an informed decision about these COVID-19 vaccines.

Facebook Fact Checkers Try to Discredit These Reports but End Up Verifying Them Instead!

Since we appear to be the only one publishing these statistics on fetal deaths, they have been shared widely on Facebook, as one would expect, forcing Facebook to call out their “Fact Checkers” to kill the traffic to our websites where we publish this data.

If you look at the image above from one of their “Fact Checking” sites, Politifact, one is led to believe that they have actually fact checked our data and found it be false.

But if you read the actual article they wrote, if you understand English and have at least a 3rd grade reading level, you will quickly see that they do not deny the facts we are reporting at all, but instead are attacking us based on the search tool we used to extract this data from VAERS, which is Medalerts.org.

But even then, they are not disputing the fact that the data extracted from VAERS through Medalerts.org is inaccurate or different from the CDC’s own front-end search tool for VAERS, because it is not, it is because they do not like the organization who developed this search tool, the National Vaccine Information Center (NVIC), who they refer to as “an anti-vaccine organization.”

If you have ever studied logic, you will know that this is a logical fallacy called an “ad hominem” attack, which means an attack against the reputation of the person making a claim, but not the actual facts of what they are claiming.

The opposite of an “ad hominem” fallacy is the “appeal to authority” fallacy, which says that something is true based on the person’s reputation independent of whatever “facts” they are claiming to be reporting.

And that’s all Facebook is doing here. They are saying that the results from Medalerts.org are not trustworthy because the NVIC is “an anti-vaccine organization,” and they are disagreeing that the facts from VAERS proves that the COVID-19 vaccines are dangerous for pregnant women, because the CDC, The American College of Obstetrics and Gynecology, and The American Academy of Pediatrics all agree that the vaccines are safe for pregnant women, regardless of what is published in VAERS.

If you search for all cases filed in VAERS following a COVID-19 vaccine from Medalerts.org today, you will get a result of 1,168,894 cases. (Source.)

One of the nice features of the Medalerts.org search tool is that they provide a URL at the bottom of every search conducted to display the results of that search, so you can go back to it and share the link with others.

The CDC VAERS search tool does not supply that. But if you do a search on their site for all cases in VAERS following a COVID-19 vaccine, you get the exact same number: 1,168,894. 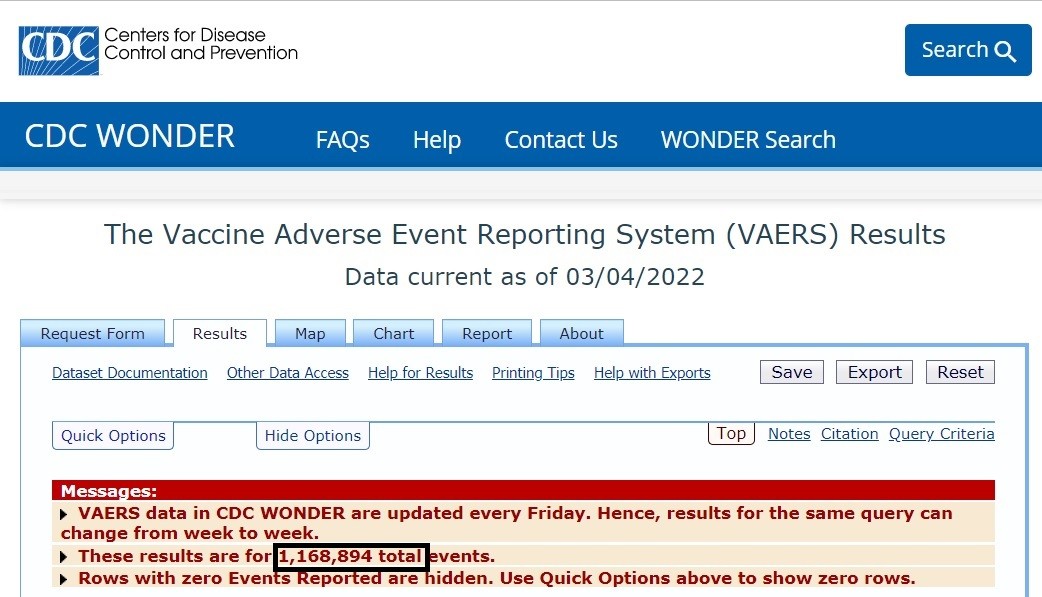 In another, more recent, Facebook “Fact Check” article that did not slander Health Impact News, but Steve Kirsch, where they also tried to discredit Medalerts.org, they actually admit that the Medalerts.org search tool is the original one, and that the CDC Wonder tool came years later.

Again, if you simply just look at their headline: “How an alternative gateway to VAERS data helps fuel vaccine misinformation“, and don’t actually read the article, you would be led to believe that they totally discredited Medalerts.org as reporting false data.

But this is what they actually wrote about Medalerts.org, after you get past all the ad hominem attacks against Kirsch:

MedAlerts is an online search tool that allows users to sort through records from VAERS, the federal repository of reports about things that happen to people after they are vaccinated. Created in 2003, a few years before the Centers for Disease Control developed its own Wonder search tool, MedAlerts was a pioneering step in making VAERS reports more accessible and visible to the general public.

The MedAlerts site says that it has “a better user interface, more powerful search capabilities, and more extensive reporting,” than CDC Wonder, “making it the best VAERS search facility.” (Source.)

They even give credit to the NVIC for being the ones who originally made this data in VAERS accessible to the public!

NVIC says it played a role in developing the National Childhood Vaccine Injury Act, which Congress passed in 1986. The law created a compensation program for families who claimed injury from vaccines, while limiting the legal exposure for drug makers.

“NVIC has monitored and reported on the implementation of the safety provisions in the (National Childhood Vaccine Injury) Act since it was enacted in November 1986,” Barbara Loe Fisher, NVIC’s president and co-founder, told PolitiFact.

The law also led to the creation in 1990 of VAERS, the reporting system that the government would use to track suspected vaccine side effects, Seth Mnookin wrote in “The Panic Virus: A True Story of Medicine, Science, and Fear,” a history of the anti-vaccine movement.

For years, VAERS reports were mostly invisible to the public. Until 2001, the public could access the reports only through a Freedom of Information Act request. In the early Internet era, the reports were digitized and made available for download from the VAERS website. Only in 2006 did the government develop CDC Wonder, a search tool for all of the agency’s data.

MedAlerts came before that. It was initially created by computer scientist Steven Rubin in 2003, before becoming subsumed by NVIC in 2005. The purpose of MedAlerts is to provide the public with a “user-friendly way to search the VAERS database,” Fisher said.

MedAlerts presents users with a simpler interface for queries and search results displayed in neatly formatted, easy-to-read tables. Whether they’re accessed through MedAlerts or CDC Wonder, though, the underlying data are the same VAERS reports. (Source.)

Never once do they state that the data pulled from VAERS via the Medalerts.org search tool is inaccurate.

Again, they attack NVIC instead, which is a non-profit, and their biggest donor, Dr. Joseph Mercola, but not the accuracy of the data they extract from VAERS.

And what is NVIC’s biggest sin in allowing people to use this free tool to easily retrieve data from VAERS according to this “Facebook Fact Checker” article?

One key difference between the two search tools is how forthcoming they are about those limitations and flaws. CDC Wonder requires users to acknowledge a lengthy disclaimer before initiating a search, and repeats the full text of the disclaimer with the search results.

On the NVIC’s MedAlerts, by contrast, you can search freely without ever seeing the disclaimer. There’s an inconspicuous link to the government disclaimer on the home page, and another link shown with the search results.

But people who don’t notice or click on the link won’t see the warnings. This leaves little standing in the way between the public and raw, unverified data. (Source. Emphasis mine.)

Oh no!!! We can’t let the public have access to the raw data without the Government explaining it and making them sign a disclaimer agreeing with the government before letting them search! Oh no, that should not happen because the public is too stupid to read raw data! They might actually believe that there are safety problems with the vaccines, and that would hurt sales!

If you read the Government disclaimer, which they even admit is provided on Medalerts.org, just not required to agree to prior to searching, it basically says that the information in VAERS is not reliable and that only the U.S. Government can interpret it.

I am sure they would love to get rid of VAERS completely, but they are required by law to maintain this database. It was one of the requirements in the 1986 Act that now prevents people from suing vaccine manufacturers over injuries and deaths due to vaccines.

The pharmaceutical companies have legal immunity from these lawsuits, and one has to sue the Federal Government in their own Vaccine Court instead, and even then you cannot sue for any damages from a COVID-19 vaccine, because they are part of the PREP Act.

So if the U.S. Government wants us to believe that VAERS is not reliable and should not be used to determine if a vaccine is safe or not, then the 1986 National Vaccine Injury Compensation Program should be abolished, and people should be able to start suing the pharmaceutical companies again if they put bad vaccines into the market that kill and maim people (which is pretty much all of them).

In the meantime, Facebook’s “Fact Checkers” are anything but sources of checking “facts.” They are constantly being sued, and in a lawsuit filed last year, they were forced to take the position that their “fact checking” articles were actually “protected opinions” so that they could at least have the illusion of being protected by the First Amendment right to “Free Speech.”

The labels themselves are neither false nor defamatory; to the contrary, they constitute protected opinion. (Source.)

As for the fetal deaths that are following the COVID-19 vaccines in record numbers, here are two recent stories from young mothers who lost their unborn babies just after receiving a second COVID-19 vaccine.

Perhaps their words and their experiences, which obviously represent, at least, many thousands of others, can better communicate just how truly horrible this is.

This is on our Bitchute channel, Odysee channel, and also on our Telegram channel.

The following videos are all on our Bitchute channel.