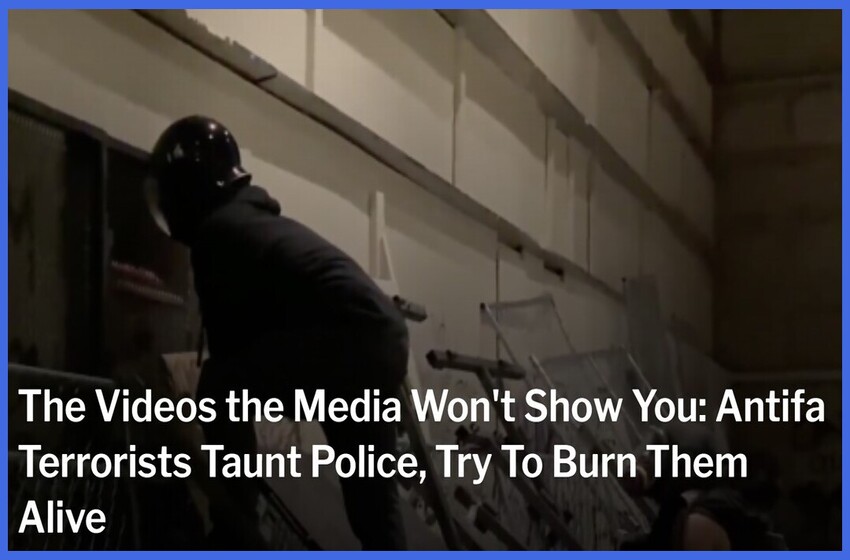 Brittany M. Hughes , @RealBrittHughesJ uly. 20. 2020
More disturbing footage out of Portland, Oregon captured the moment armed Antifa terrorists tried to smash their way into a federal courthouse, taunting federal officers inside to come out.
“Come on out boys! What you got?” one Antifa rioter repeatedly called in through what appears to be a boarded-up window.
“Come out, you filthy (inaudible) pigs! Police want a fight? We’re giving them a fight!” the helmeted man yelled.

After trying to smash their way inside Portland federal courthouse, they call for officers to come out. Video: @ShelbyTalcott pic.twitter.com/CxxnSbCGOz

After failing to break in and goad police into a fight, Antifa then tried to barricade the front door so no one could get out before attempting to set fire to the building, using the American flag as kindling.

And after the tear gas cleared, antifa rioters return to the Portland federal courthouse. They’re now using the fence they broke earlier to barricade front of the courthouse so that law enforcement can’t come out. #PortlandRiots Video by @ShelbyTalcott: pic.twitter.com/IRG91SKoex

Anarchist rioters have started a fire on a side of the Portland federal courthouse. One of the first things they burn? An American flag. #antifa #PortlandRiots Video by @ShelbyTalcott: pic.twitter.com/1N4nhFtN20

After setting up barricades & burning the American flag, antifa rioters are trying to grow the fire they set on the Portland federal courthouse. #PortlandRiots Video by @ShelbyTalcott: pic.twitter.com/nwyXhj0XRH

Of course, the anti-American, Marxist media wasted no time blaming federal officers for stirring up trouble in Portland – despite the fact that anyone with eyes and half a lick of common sense could see trouble had already come, and for years now. The media immediately ran with headlines blaming the feds for violating First Amendment rights and targeting protesters for arrest, bolstering their biased reports with similar quotes from Portland city officials, who’ve long since abandoned their city to the violent rioters who’ve vandalized and destroyed buildings, ripped innocent people from cars and beaten them in the streets.

“This is part of a coordinated strategy of Trump’s White House to use federal troops to bolster his sagging polling data, and it is an absolute abuse of federal law enforcement officials,” Wheeler said. “As we were starting to see things de-escalate, their actions last Saturday night and every night since have actually ratcheted up the tension on our streets.”

Here’s an excerpt from Reuters:

“It’s kidnapping people!” one person said off-camera, as officers marched a protester away.

Now, predictably, what none of the media cameras ever seem to catch are the moments violent domestic terrorists with Antifa accost a man’s car in an intersection or beat someone half to death with bike locks and crowbars.