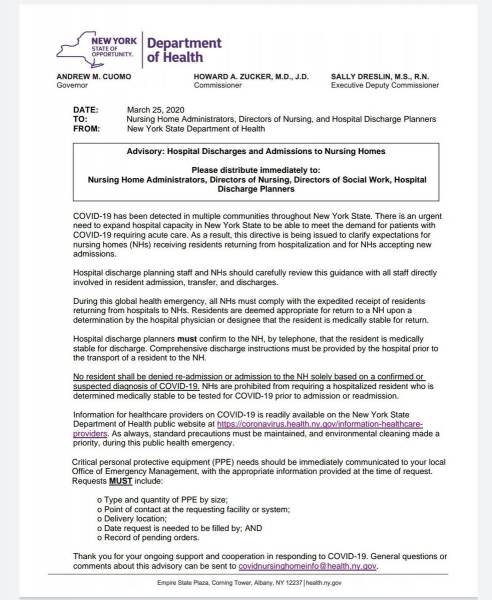 So we now know the Democrat plan to win in 2020… Lie to the American people about Trump and blame Europe and not China for the Wuhan coronavirus.

Governor Andrew Cuomo from New York State has the worst coronavirus numbers in the world. The mortality rate in New York is significantly higher than any country in the world today!

As reported earlier according to the Worldometer

** New York State has 1,692 deaths per one million residents.

** No country comes close to New York state in number of deaths per million residents!

The closest country is Peru that has 796 deaths per million residents!

The actions of New York’s governor Andrew Cuomo have led to thousands of coronavirus deaths in the state.

It was New York state policy to put the sick patients back in the nursing home.

This order has since been removed from the New York State Department of Health website.

More people died in nursing homes in New York, due to Governor Cuomo’s policies, than died on 9/11

President Trump blocked travel from China back in January.

This was something Democrats accused him of being a racist for.

This was really disgusting.

Democrats have no shame.  And their intent is clearly to lie to the American people and hope it sticks.