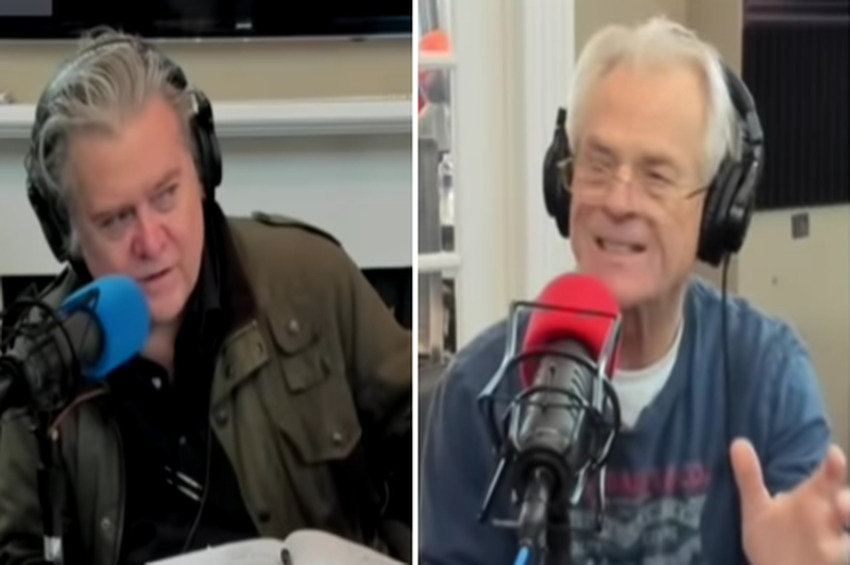 White House trade adviser Peter Navarro sat down with Steve Bannon last weekend for a deep dive on how the Trump administration is reviving America’s manufacturing base after “a combination of NAFTA and China basically gutted this country,” as well as Navarro’s predictions for 2020.

For those who need to be brought up to speed on Trump’s economic roadmap, this interview is required listening.

“Why is manufacturing and trade so central to Trump’s vision?” asked Bannon, the former White House chief strategist who now hosts the “War Room: Impeachment” podcast.

“Economic security is national security,” replied Navarro. “You can’t have a strong United States of America from a military perspective unless you have a strong manufacturing base which begets a strong defense industrial base. The second reason is simply that these jobs tend to pay more, plus they have a robust supply chain which ripples jobs out across the land.”

Navarro notes the ‘high multiplier effect‘ from manufacturing felt across the economy – as it provides a “key source of employment for those who don’t go to college,” which benefits “blue collar folks in flyover states, in our communities, that can earn very good wages and an ability of working with their hands, building things for America and the world.”

“As someone once said, the Republican Party under President Trump has become the party of the working class, and that’s why we focus on manufacturing,” he added.

Bannon asked Navarro exactly what happened to US manufacturing, noting: “We were the most advanced manufacturing county in the world – the workshop for the world – and all the sudden we weren’t over a period of 10, 20, 30 years. How did that happen, what were the driving forces, and where did the manufacturing base actually go?”

“What happened in the early 2000s, shortly after China joined the World Trade Organization, I was teaching at a business school with executive MBAs, and they were fully employed. And I started seeing that they started losing their jobs. And I’m thinking ‘this is odd, we’re in one of the most robust counties in the country. How is this happening?” said Navarro.

While the ‘default hypothesis’ at the time was that China was simply a cheaper source of labor, Navarro says he found a “much more malevolent story” involving a state-sponsored capitalist model “driven by all manner of unfair subidies,” adding “I saw state-owned enterprises acting as national champions.”

“We lost over 70,000 factories because of this. Over 5 million manufacturing jobs, and it cut out basically the heart of our manufacturing base. And so, when you have original equipment manufacturers that go over to China to set up shop there … the supply chain withers and dies.

According to Navarro, China has been committing ‘seven deadly structural sins’ against the United States.

“We have what I would describe as a naive corporate executive core over the last 15-20 years, thinking that all countries would play by the same rules. So when you encounter a rival that will do – ok, first, number one, cyber intrusions into our business networks – in other words, China will come in – and they do this with people in military uniforms sitting in Shanghai. It’s an organized attack. So you go in to a corporation, small, medium or large. You hack in, you get inside there, and you can track all manner of things including trade secrets and intellectual property.”

“State-owned enterprises are a powerful weapon in China (“Huge” – chimed in Bannon). This is the idea where they’ll have – they used to have several national champions. Now what they’re doing is consolidating every industry into one big bad national champion.”

The Trump economy and the ‘four points of the economic compass’

“Everything stems from the DNA of the campaign. Everything.” said Navarro – referring to Trump’s economic roadmap. “Early on in the campaign we were talking about four points in the economic policy compass.” He suggests people read the transcript of Trump’s June 2016 speech for a full understanding of how the administration is trying to foster growth and economically strengthen the country.

“If you think about tax cuts … you get the bump from lowering the corporate tax, because when you take that from 35 to 21 percent, that’s what gets you the investment back on shore. So that’s like, that’s like, critical. You get a little Keynsian bump from the personal income tax cut, but the real ‘mana from heaven’ in that is the corporate tax cut.”

“The President undersold that during the campaign – deconstruction of the administrative state. He promised that he would get rid of two regulations for every new one, and its been a real – I mean… he’s been [cutting] eight regulations out for every one, and that’s a pure Reaganesque, positive supply shock because its deflationary – which allows us to grow faster without concern over the Fed. It’s a growth driver.”

“Guess what, we’re the biggest oil producer in the world. We’re exporting oil. What that does is a couple things; for businesses, it gives us global competitive advantage. That’s a big thing we have over Europe, because they have a similar economy. Also from the consumer’s point of view.”

“Absolutely, and you look at coal, gas, oil – it’s amazing. You hear Joe Biden talking about getting rid of fossil fuels and it’s like, that’s going to play well in Wyoming and Pennsylvania and Texas. You’re talking about putting tens of thousands of people directly out of work, and millions out of work indirectly.

“The arithmetic is pretty simple; one billion dollars of trade deficit equals five thousand jobs. Scale that up, dude. Scale that up. When you’re shipping off your auto production to Germany because their tariff is four times higher than our tariff – tell Goldman Sachs, that’s losing jobs in Detroit. I’m sorry, and if you’re losing jobs in Detroit, you’re losing money, GDP, and wages.”

“Revolution in the Republican party“

Bannon asks Navarro how the GOP got to the point of embracing “this radical concept of free trade, when it’s obvious China is a totalitarian, mercantilist system,” adding “How did the mass psychology of free trade infect the Republican party?”

Enter Trump, who introduced the concept of “reciprocity and fair trade,” according to Bannon – which Navarro immediately interjected “This is revolution in the Republican party.”

“Tariffs are changing that equation. In this phase-one deal, they promised to buy $200 billion above the 2017 baseline, so that’ll do it.”

“Trump has set in motion the exodus of the supply chain from China, regardless of what happens” said Navarro – responding to the notion posed by guest Jason Trennert of Strategas that CapEx has been soft due to corporate reluctance to expand amid the trade war. “I think that people understand now in the corporate world the risks associated with locating your supply chain there.”

“Don’t forget, we were waiting for USMCA to get done,” Navarro added, referring to the renegotiation of NAFTA which Democrats agreed to last week. “That’s going to spur a tremendous amount of investment here and in the hemisphere.”

“You’ve got Keynsian drivers – last night the President signed the MDAA and the appropriations bill, which is going to be a straight solid Keynsian stimulus through 2020, along with the tax cut which has been in place. And we’ve got the structural drivers that Jason mentioned, which is the deregulation – the gift that keeps on giving [including] the cheap energy that comes out of that.”

“And then all these trade deals are going to start kicking in. They’ll have initially an investment component like USMCA, and then they’ll have the production component that would begin to export more. And then we’ve got the micro-drivers. One thing I love about President Trump; every day he gets up talking about how to create good jobs for Americans who work with their hands. So at the micro-level we’re doing things like arms defense transfer policies which are building more F-16’s to sell to the world so there’s plants in South Carolina. We’re taking care of our shipyards in places like Philadelphia, Marinette, Wisconsin, the Panhandle in Florida. We are taking care of our combat vehicle plants in places like Ohio and York, Pennsylvania. And the Steel tariffs themselves have been working beautifully to induce literally billions and billions of dollars in the country.”

In closing, Navarro sees a “tremendous stimulus in 2020, coupled with a consumer because of the low unemployment rate is seeing fat paychecks and has high confidence about job security, and they will spend.”