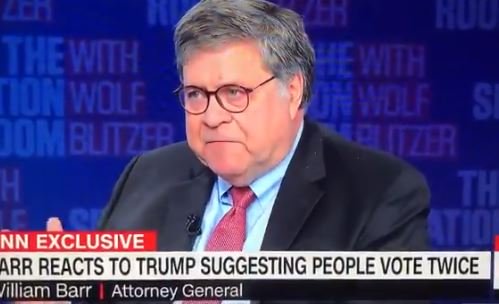 Attorney General Bill Barr went on with Wolf Blitzer on CNN on Wednesday. During the discussion Wolf Blitzer tried to defend the Democrat plan to send out MILLIONS of ballots to voters this fall for the general election. Blitzer thinks this is perfectly fine and acceptable.

Attorney General Bill Barr: Now what we’re talking about is mailing them to everyone on the mailing list when everyone knows the lists are inaccurate. People who should get them don’t get them which is one of the major complaints in states who have tried this. And people who get them are not the right people… Sometime multiple ballots go to the same address. You think that’s any way to run a vote?

Bill Barr went on to say that it is absolutely insane to push this fraudulent system when the country is so divided at this time.

Democrats don’t give a damn they just know it is an opportunity for them to steal the election this year.

Whoever posted this response to the tweet and video is a genius.