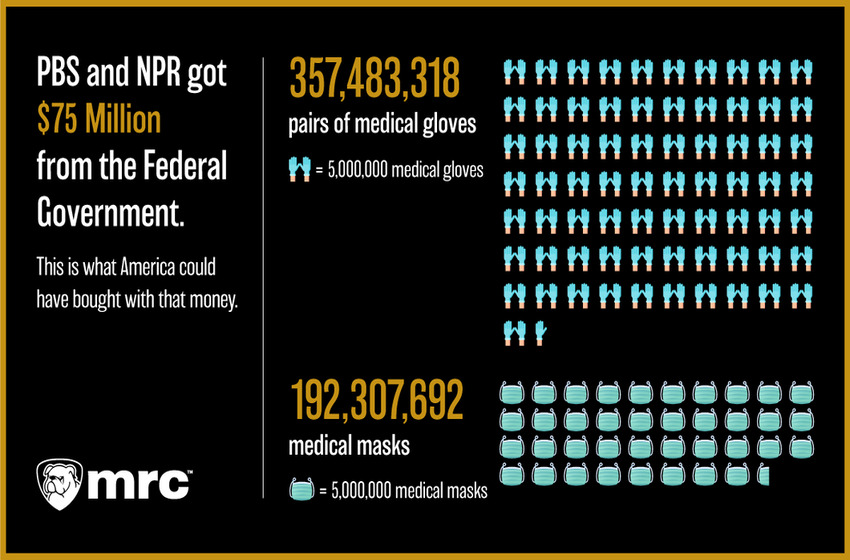 Non-essential PBS/NPR stations are taking $75 million from the emergency $2 trillion “stimulus” bill to deal with the economic ramifications of the coronavirus pandemic.

This is what America did NOT get because of PBS/NPR:

Lobbyists for the public broadcasters claim this money will go to “local news and information,” “distributing emergency alerts,” and “partnering with local and state educational authorities to provide remote learning services for millions of pre-K to 12th grade students.” But they use the same talking points about their everyday funding.

To many conservative Americans, NPR and PBS stations are better known for partisan information and misinformation, like these recent items from NewsBusters:

PBS reporter Yamiche Alcindor hounded the president for using the term “Chinese virus”
PBS reporter Yamiche Alcindor shamed the president for questioning what governors are requesting
PBS doing an hour-long documentary trashing the National Rifle Association, like that’s relevant right now
NPR putting on a Biden-donating public-health expert to trash the president’s virus efforts
NPR fondly recalling the 12th anniversary of Barack Obama’s “race speech,” as if that’s preciously newsworthy
PBS pundit David Brooks trashing Trump: “this is what happens when you elect a sociopath as president”
PBS talk show host Christiane Amanpour finding the environmental “silver lining” in a deadly virus
If you sensed that the Democrats inserted PBS/NPR money into the bill to get more of what these links describe, you’re not wrong!

Follow Us:
The mission of the Media Research Center is to create a media culture in America where truth and liberty flourish.

The mission of the Media Research Center is to create a media culture in America where truth and liberty flourish. The MRC is a research and education organization operating under Section 501(c)(3) of the Internal Revenue Code, and contributions to the MRC are tax-deductible.