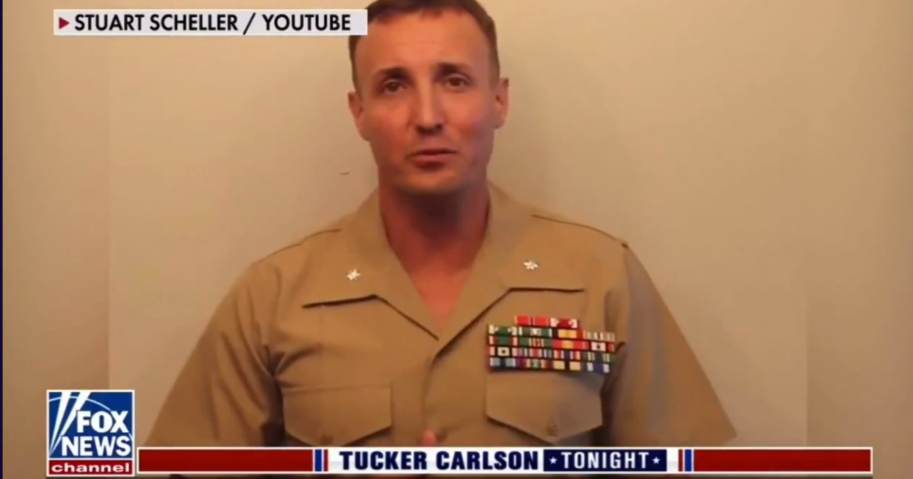 On Monday, Marine Battalion Commander Lt. Col. Stuart Scheller was arrested and sent to the brig after he publicly excoriated Biden’s leadership over the United States’ catastrophic evacuation from Afghanistan that left 13 service members dead and several more critically injured among countless other atrocities.

Despite tendering his resignation over a month ago, he now sits in a cell indefinitely awaiting trial for simply questioning the chain of command.

Lt. Col. Scheller Incarcerated and Sent to the Brig for Speaking Out against Weak US Generals for Surrendering Afghanistan, Stranding Americans and Arming Taliban Terrorists

On Tuesday night, Lt. Col. Scheller’s lawyer – Tony Buzbee – joined Tucker Carlson on his show to discuss the unprecedented political imprisonment and provide an update on the case.

Buzbee confirmed that the decorated Marine commander has been sitting in jail “indefinitely” since he was taken into custody and that he currently has no formal charges against him. There is “supposedly” an initial hearing set for this Thursday, but they have still not been notified about what his charges will be.

“When somebody tried to speak out and say: look, we could have done a lot better. We owed these marines, and sailors, and army personnel better than that.” – They not only told them to shut up, but when he didn’t shut up they put him in jail.”

Thankfully, Lt. Col. Scheller – who is a husband and a father – is in high spirits and has been optimistic throughout the ordeal. According to Buzbee, the support they have received from the public has been “overwhelming;” one group has already raised over $200,000 to donate towards his legal expenses.

Lt. Col. Scheller is a true American. The people have his back, they will not stand for this.

“People see this for what it is. They see this from the top brass trying to shirk responsibility and when somebody in the chain of command speaks up, they’re silenced – we can do better than that.

This is a man who is a 17-year Marine – A Marine Officer – An Infantry officer, just like I was – A guy who’s conscious required him to speak out and the American military, specifically the US Marine Corps, has put him in Jail for that.

This will not stand.”

Before Buzbee provided his update, Tucker Carlson was able to read a statement from Lt. Col.