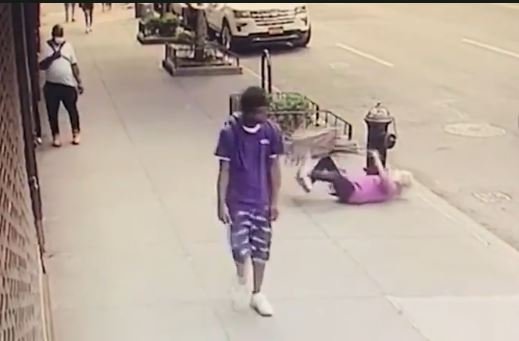 A 92-year-old woman was brutally knocked down in a random broad daylight attack in Manhattan last Friday.

The video was captured on security camera.

The 92-year-old woman was walking down the street with her walker when 31-year-old Rashid Brimmage walked by and punched her in the side of the face.

WANTED for ASSAULT: Do you know him? On 6/12 at 3:23 PM, on 3rd Avenue between 15th Street & 16th Street in Manhattan, he pushed a 92-year-old female to the ground causing her to strike her head on a fire hydrant. Have info? Call/DM @NYPDTips at 800-577-TIPS. pic.twitter.com/SjTltmuNbb

According to the New York Post, Rashid Brimmage is a convicted sex offender with over 100 prior arrests!

Police have collared the goon who knocked an elderly woman to the ground in a random attack — a convicted sex offender with more than 100 prior arrests, according to police and sources.

Police sources said cops recognized the attacker, who has had dozens of run-ins with law enforcement — including 101 arrests.