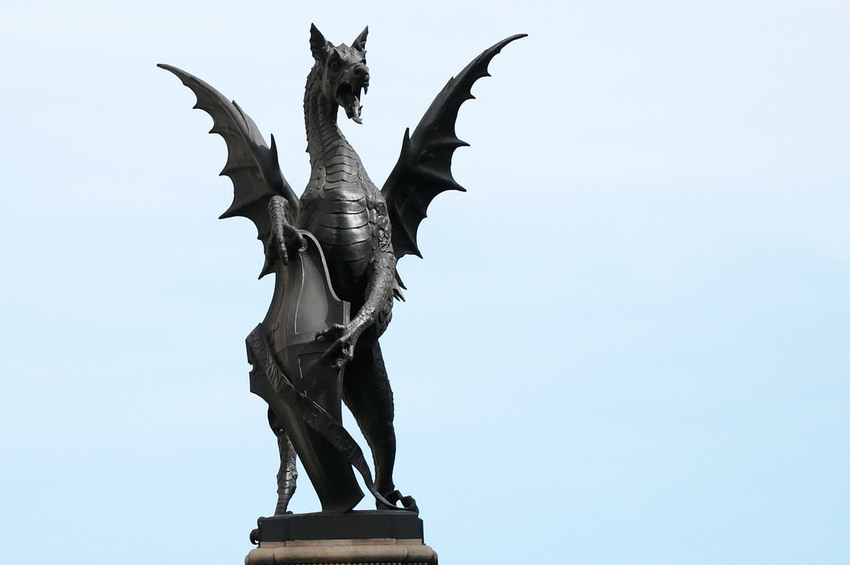 A statue of a dragon marks the boundary of the city of London, England. (Suzanne Plunkett/Reuters)

While the author of The Hobbit disliked allegory, his great thematic preoccupation with the struggle between good and evil remains as relevant as ever.
For its 1937–38 “Christmas Lectures for Children,” the Natural History Society of Oxfordshire announced forthcoming talks on coral reefs, birds, whales, horses — and dragons. The latter topic was taken up by J.R.R. Tolkien, a professor of English literature who had just published The Hobbit, an immensely popular book involving a dragon. Tolkien’s lecture, before an audience packed with children of all ages, tackled a decidedly adult subject: the problem of evil in the world and the heroism required to combat it.

Tolkien began, disarmingly, with a slide show of prehistoric reptiles, including a Pteranodon in flight, to remind his listeners that “science also fills this past with dreadful monsters — many of the largest and most horrible being of a distinctly lizard-like or dragonish kind.” These ancient creatures, he said, embodied legendary qualities found in dragon mythology. The dragons with whom he had an acquaintance “loved to possess beautiful things.” Greed and hatred motivated them. “And how can you withstand a dragon’s flame, and his venom, and his terrible will and malice, and his great strength?”

It probably was not lost on the children present that Tolkien’s mythical dragons sounded a lot like the people who inhabited the real world. The adults might have discerned a more ominous message. Tolkien delivered his lecture on January 1, 1938. Nearly a year earlier, on January 30, 1937, Adolf Hitler had officially withdrawn Germany from the Treaty of Versailles and demanded that its colonies be returned. In August, Soviet leader Joseph Stalin, in the midst of “the Great Purge,” authorized mass executions for 750,000 citizens deemed enemies of the Communist revolution. In December, Benito Mussolini, after brutally invading Ethiopia, pulled Italy out of the League of Nations.

Tolkien’s analysis went deeper still. Drawing on the epic English poem, Beowulf, he said that the English people had a special insight into the moral significance of dragons. In the poem, Beowulf defeats the demon Grendel, Grendel’s mother, and a fearsome dragon — but at the cost of his own life. Tolkien was fascinated by such tales, with their portrayal of the persistence of wickedness, the danger of pride, and the value of heroic sacrifice for a noble cause. “One might say that the chief morals that such stories teach, or rather awake in one’s mind, are all shining in this story,” he told his audience.

These were not popular themes in a post-war England awash in pacifism and moral cynicism. In 1933, for example, students at the Oxford Union Society had famously approved the motion “This House will under no circumstances fight for its King and country.” A veteran of the Battle of the Somme during the First World War, Tolkien nevertheless rejected the disillusionment that seized the minds of many in his generation. He loved England and its cultural achievements without glorifying war or exalting nationalism.

Soon after Tolkien began writing The Lord of the Rings, the story took on a profound sense of foreboding not seen in his earlier work. “But last night I told you of Sauron the Great, the Dark Lord,” Gandalf the Wizard explains to Frodo Baggins. “The rumors that you have heard are true: he has indeed arisen again. . . . Always after a defeat and a respite, the Shadow takes another shape and grows again.” On October 13, 1938 — barely two weeks after the Munich Agreement, which effectively delivered Czechoslovakia into Nazi hands — Tolkien confessed to his publisher that his new story was no bed-time fable: “The darkness of the present days has had some effect on it.”

In the perpetual fight against dragons, Tolkien suggested, modern weapons would not be decisive; something else was required. “Dragons can only be defeated by brave men — usually alone,” he said. “Sometimes a faithful friend may help, but it’s rare: Friends have a way of deserting you when a dragon comes.” Politically speaking, those words would become something of a prophecy: After Hitler invaded Poland in 1939, triggering World War II, Britain’s chief military ally — France — abandoned its treaty obligations and signed a peace agreement with Germany.

Many have assumed that Tolkien drew from the events of the 1930s and ’40s for his story about the battle for Middle-earth, an epic struggle between good and evil. Under this view, the Orcs represent Nazi stormtroopers and the terrifying dragons of Nazgûl are like the German Luftwaffe at the Battle of Britain.

But Tolkien disliked allegory. The truth is that the catastrophic rise of fascism and communism merely confirmed his insights into the human condition: the nearly irresistible appeal of the demagogue, the schemes for a utopian future, the insatiable will to power. “For the dragon bears witness to the power and danger and malice that men find in the world,” he said. “And he bears witness also to the wit and the courage and finally to the luck (or grace) that men have shown in their adventures — not all men, and only a few men greatly.”

7
However dark the modern world might appear, Tolkien could never give up on the older concepts of virtue, valor, duty, sacrifice, and grace. As he told his audience: “Dragons are the final test of heroes.” If Tolkien is right, then what does that say about us? The lust to possess and subjugate is as strong and widespread as ever; dragons continue to roam the Earth. We seem to have a terribly difficult time, however, finding authentic heroes to fight them.

All lecture excerpts quoted with permission. © The Tolkien Trust 2019.

JOSEPH LOCONTE is an associate professor of history at the King’s College in New York City and the author of A HOBBIT, A WARDROBE, AND A GREAT WAR. He is currently at work on A FORTHCOMING FILM based on the book.