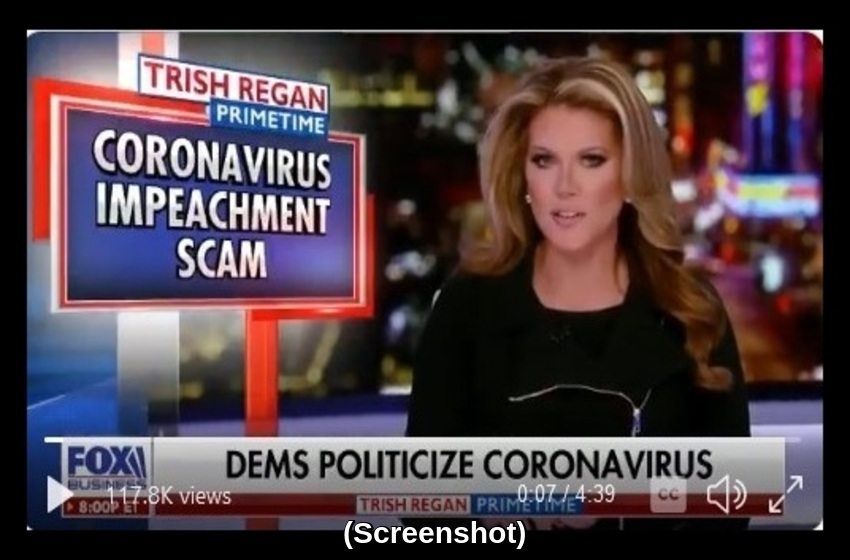 Democrats and liberal media are using the coronavirus in another effort to impeach Donald Trump, and they don’t care how many Americans need to suffer in the process, Fox Business Channel’s Trish Regan said at the opening of her Monday show.

“Don’t kid yourself: they told us how much they crave a recession as a way to get rid of Donald Trump,” Regan said, citing the Mueller investigation and Ukraine-gate as examples of the indifference of liberal politicians and media towards the harm they cause in pursuit of their agenda:

“We’ve reached a tipping point. The chorus of hate being leveled at the president is nearing a crescendo as Democrats blame him – and only him – for a virus that originated halfway around the world! This is yet another attempt to impeach the president.

“And, sadly, it seems they care very little for any of the destruction they are leaving in their wake. Losses in stock market – all this, unfortunately, just part of the political casualties for them.

“You know, this is the time to be united, not to be pointing fingers, not to be encouraging hate. And, yet, what do we see? We see the absolute opposite from the left tonight.

“Good evening, everyone, I’m Trish Regan. The hate is boiling over. Many in the liberal media are using – and I mean, ‘using’ – coronavirus in an attempt to demonize and destroy the president.

“I see: this is impeachment all over again. And – like with the Mueller investigation, like with Ukraine-gate – they don’t care who they hurt. Whether it be their need to create mass hysteria to encourage a market sell-off unlike anything we’ve seen recently, or whether it be to create mass hysteria in order to stop the economy dead in its tracks.

“Don’t kid yourself: they told us how much they crave a recession as a way to get rid of Donald Trump.

The liberal media have no interest in discovering the true causes of problems like the coronavirus or the market sell-off, they simply want to spin a narrative that harms President Trump, Regan said:

“For the media to spin a narrative that this sell-off and this virus are all a result of President Trump, it’s just wrong. But, unfortunately, I guess they needed someone to blame, they were looking for someone to blame; they want to blame him for, literally, anything they can. And they have no real interest, shall we say, in finding who is to blame, who is the root cause of all this. From what we can tell, this all originated out of China – yet, with Donald Trump as their political target, that’s all they need.”

Regan reminded viewers that the media didn’t encourage hysteria when the swine flu killed 12 thousand Americans – because they “didn’t want to insult heir precious President Obama.” And, “We didn’t even see this kind of insanity for SARS, and SARS and Ebola were far more deadly,” she said:

“From 2009 to 2010, nearly 61 million Americans got swine flu, and more than 12 thousand Americans died. As many as 575,000 people worldwide died of the swine flu, and was there any criticism? No. Because why? Because the media didn’t want to insult their precious President Obama, I suppose.”

What’s actually hurting the markets right now is that people and media are allowing their own hate and bias against Trump “to spiral out of control,” Regan said:

“The media’s reaction, with the global town halls and CNN treating this like it’s some missing-plane story – what is that? I mean, did they do this during Ebola? No. We didn’t even see this kind of insanity for SARS, and SARS and Ebola, those viruses were far more deadly.

“So, why the melodrama on such an agitated scale right now? Why are the markets reacting like this?

“I’ll give you two words: Donald Trump. And, the media doesn’t like him.

“People, including the media – and some investors – are allowing their own hate and their own bias against him to spiral out of control, leading to massive sell-offs right now in the market.”