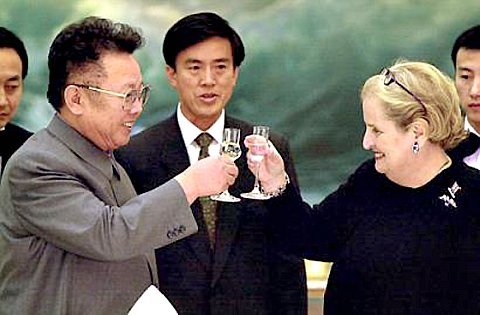 The Trump administration removed globalists and warhawks from the Defense Policy Board on Wednesday including Madeleine Albright, Henry Kissinger, Jane Harman and Eric Cantor.

That was long overdue.

Madeleine Albright is famous for bribing the North Korean dictators with US cash in a failed peace agreement.

Here is a much forgotten exchange between Lesley Stahl and Madeleine Albrighton “60 Minutes” back on May 12, 1996 that is not getting much play lately:

Lesley Stahl on U.S. sanctions against Iraq: We have heard that a half million children have died. I mean, that’s more children than died in Hiroshima. And, you know, is the price worth it?

Secretary of State Madeleine Albright: I think this is a very hard choice, but the price–we think the price is worth it.

Here is the video:

Several high profile members of the Defense Policy Board were removed on Wednesday by the Trump administration, in yet another purge of longstanding foreign policy experts and national security establishment figures in the final days of the Trump era, according to three defense officials.