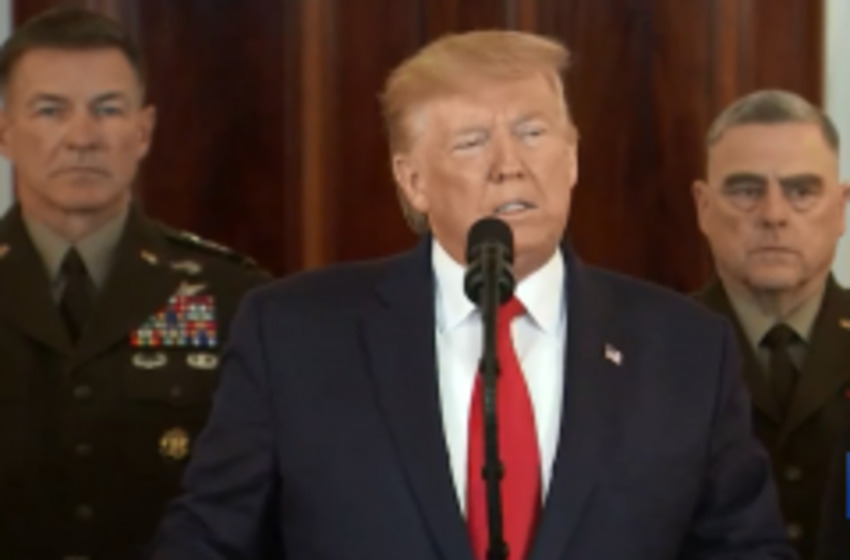 President Trump said that “Iran appears to be standing down” in an address to the nation Wednesday, and confirmed that no casualties resulted from the previous evening’s Iranian rocket attack on two U.S. bases in Iraq.

Trump signaled that a military response would not be forthcoming unless Iran further escalated the situation, saying “the United States is ready to embrace peace with all who seek it.” He did, however, announce that the U.S. would implement additional sanctions on Iran’s already-struggling economy.

The president also demanded that Iran “abandon its nuclear ambitions and end its support for terrorism,” and called on U.S. allies to break from the Obama nuclear deal to “work together toward making a deal with Iran that makes the world a safer & more peaceful place.”

He also bashed the Obama administration’s conciliatory dealings with Iran and emphasized U.S. energy independence, calling on NATO allies to “to become much more involved in the Middle East process.”

U.S. officials reportedly said the attacks, which targeted bases in Al-Asad and Erbil, were designed to avoid U.S. casualties and further escalation. Of the 15 missiles fired, two hit Al-Asad, one hit Erbil, and four failed mid-flight.

“Iran took & concluded proportionate measures in self-defense . . . targeting base[s] from which cowardly armed attack against our citizens & senior officials were launched,” Iranian foreign minister Javad Zarif wrote on Twitter following the attack. “We do not seek escalation or war, but will defend ourselves against any aggression.”

After being briefed on the situation, Trump tweeted late Tuesday night that “All is well!”

All is well! Missiles launched from Iran at two military bases located in Iraq. Assessment of casualties & damages taking place now. So far, so good! We have the most powerful and well equipped military anywhere in the world, by far! I will be making a statement tomorrow morning.

299K people are talking about this

Following the attack, Iran’s Ayatollah Ali Khamenei said that “such military actions are not enough,” and urged the end to the “U.S.’s corrupting presence in the region.”