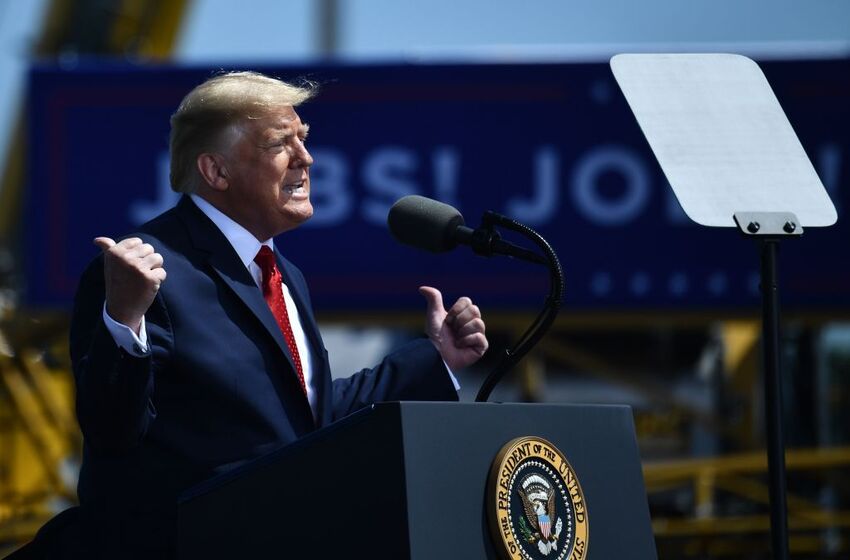 US President Donald Trump delivers remarks on the economy at Mankato Regional Airport on August 17, 2020 in Mankato, Minnesota. (Photo by BRENDAN SMIALOWSKI/AFP via Getty Images) 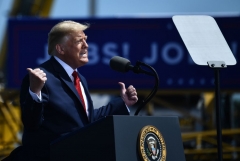 (CNSNews.com) – President Donald Trump posed the question to voters on Monday whether they want “the radical left policies” of Chicago, Minneapolis, and San Francisco imposed on the entire country.
“When I look at what happened in Minneapolis, when you look at what’s going on in different cities that are just unbelievable cities, remember this, most of the country is very safe. In fact, crime stats outside of Chicago and New York, couple of them, crime stats are record low,” Trump said in a speech in Mankato, Minn.

“Our country’s even during the pandemic we are doing well, but where they are run by the liberal Democrats, we are not doing well, and we have to get in. You know they have to ask us. We had to be asked here. They have to ask us unless we take a severe action which ideally you don’t want to take but every time we go in, we solve the problem, we solve it very quickly,” the president said.

“Seattle, look at what’s going on with Seattle. This is a real city, and they took over a large portion of that city, and they knew we were going in the following day. They knew it, so they sent their police in, and that it was like nobody ever gave up so easily as those characters, but they’re radical left anarchists,” he said.

“My administration has made clear to every mayor and governor in the country that the federal government is ready to send the National Guard and federal reinforcements. We will wipe out the problem within minutes. You saw it happening right here. He wouldn’t have a city if we didn’t demand that that take place. You wouldn’t have a city. All you have to do is say the word,” he said.

“Every voter should ask themselves a simple question, do you want the radical left policies of Chicago, Minneapolis, San Francisco imposed on the entire country?” the president asked.

“Look at Nancy Pelosi, San Francisco is going to hell and she’s in Congress saying what we should be doing. Look at the homeless problem in San Francisco, and then she is telling us about the post office. She has no clue, and I must tell you this, does she love our country? Does she love our country? I don’t think so, to be honest with you. What she’s done is a disgrace,” he said.

“If left-wing Democrats can’t run a city, why on Earth would you let them run your country?” he asked.

“We want to fix the post office and made it better. It should have been fixed 30 years ago. Over the next four years, we are going to implement an aggressive strategy to fight violent crime. It’s already been implemented, and we’ll expand the surge of federal law enforcement into crime-plagued cities, and we can do that at will. We just have to hear from you, just let us know, we will be there. We are ready, willing, and able,” he said.

“We will fight for a nation in which every American child is safe on our streets, and which every American family is secure in their homes and in which all of the American people are confident in our destiny, but to achieve this vision, we must finish the job and drain the Washington swamp once and for all,” the president said.