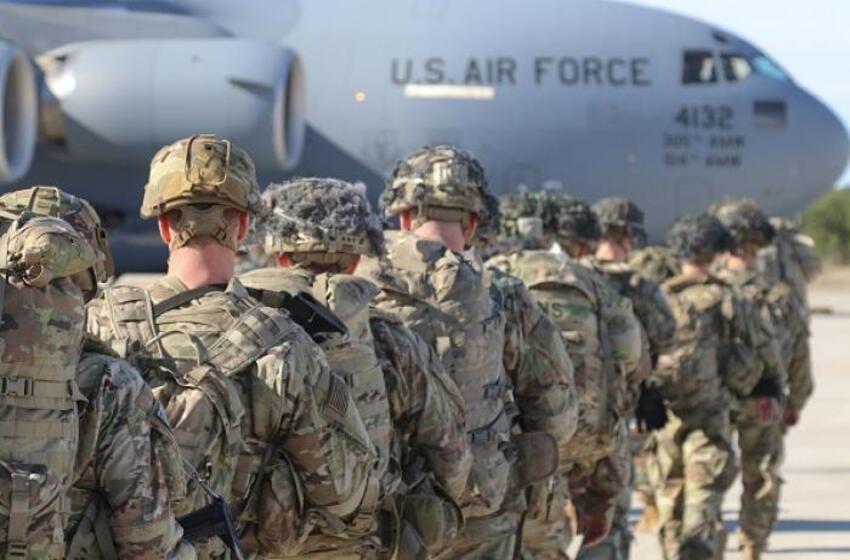 In response to tensions in Iraq, soldiers from the 82nd Airborne Division’s Immediate Response Force deploy from Pope Army Airfield, N.C. on Jan. 1 – a day after the U.S. Embassy in Baghdad was attacked and a day before Soleimani was killed. (Photo by U.S. Army Capt. Robyn J. Haake/AFP via Getty Images)

(Update:  On Sunday afternoon, President Trump tweeted again: “These Media Posts will serve as notification to the United States Congress that should Iran strike any U.S. person or target, the United States will quickly & fully strike back, & perhaps in a disproportionate manner. Such legal notice is not required, but is given nevertheless!”)

(CNSNews.com) – President Trump warned the Iranian regime overnight that in the event of an attack on an American base or an American national, some of the “beautiful” U.S. military equipment acquired over the past three years would be sent its way, “and without hesitation.”

In a tweet a few minutes after midnight, Trump said, “The United States just spent Two Trillion Dollars on Military Equipment. We are the biggest and by far the BEST in the World! If Iran attacks an American Base, or any American, we will be sending some of that brand new beautiful equipment their way… and without hesitation!”

About 20 minutes earlier, Trump posted another tweet relating to the tensions with Iran that have escalated significantly over the past 10 days.

“They attacked us, & we hit back,” he wrote. “If they attack again, which I would strongly advise them not to do, we will hit them harder than they have ever been hit before!”

Soleimani was held responsible for the deaths of hundreds of American troops during the Iraq war, and untold numbers of Syrians and Yemenis as he oversaw the regime’s overt and covert military interventions in the civil wars in those countries. His Qods Force was implicated in terrorist and assassination plots in numerous countries, including the U.S.

Also killed in the airstrike on a convoy near Baghdad airport was Abu Mahdi al Muhandis, a deputy to Soleimani and senior leader in Kata’ib Hezbollah (KH), an Iran-backed Iraqi Shi’ite militia and U.S.-designated foreign terrorist organization.

Top IRGC military officers have indicated that retaliation could come from Iran or its regional proxies.

“The great front of the resistance is geographically ready to carry out this harsh revenge,” Brigadier-General Ali Fadavi, the IRGC’s deputy commander for coordination, told state television.

The “resistance front” is the regime term for an axis led by Iran, including terrorist groups such as Hezbollah in Lebanon, Hamas in Gaza, Syria’s Assad regime, and proxy Shi’ite militias in Iraq and Yemen.

The casket of Qassem Soleimani arrives in the Iranian city of Ahvaz on Sunday. (Photo by Hossein Mersadi/fars news/AFP via Getty Images)

“We are prepared and cannot wait to take great revenge on the criminals and perpetrators behind this crime and to show the revolutionary anger against the Zionist and American currents,” IRGC Navy chief Rear Admiral Ali Reza Tangsiri said on Saturday.

Another IRGC commander, Gen. Gholamali Abuhamzeh, was quoted by state media as saying that “35 vital American positions in the region are within the reach of the Islamic Republic,” as is Tel Aviv, Israel’s biggest population center.

He added pointedly that U.S. warships are present in the Persian Gulf and the Sea of Oman, and that the Gulf’s narrow Strait of Hormuz is “a vital thoroughfare for the West.”

“Abuhamzeh emphasized that the American and Zionist officials should suffer from stress and wonder when and how Iran will exact revenge,” the Tasnim news agency reported.

In a series of tweets early Saturday evening, Trump addressed the regime threats, and delivered an unusual warning about the number of potential Iranian targets identified by the U.S.

“Iran is talking very boldly about targeting certain USA assets as revenge for our ridding the world of their terrorist leader who had just killed an American, & badly wounded many others, not to mention all of the people he had killed over his lifetime, including recently […] hundreds of Iranian protesters,” he said.

“He was already attacking our Embassy, and preparing for additional hits in other locations. Iran has been nothing but problems for many years.”

“Let this serve as a WARNING that if Iran strikes any Americans, or American assets, we have […] targeted 52 Iranian sites (representing the 52 American hostages taken by Iran many years ago), some at a very high level & important to Iran &  the Iranian culture, and those targets, and Iran itself, WILL BE HIT VERY FAST AND VERY HARD. The USA wants no more threats!”