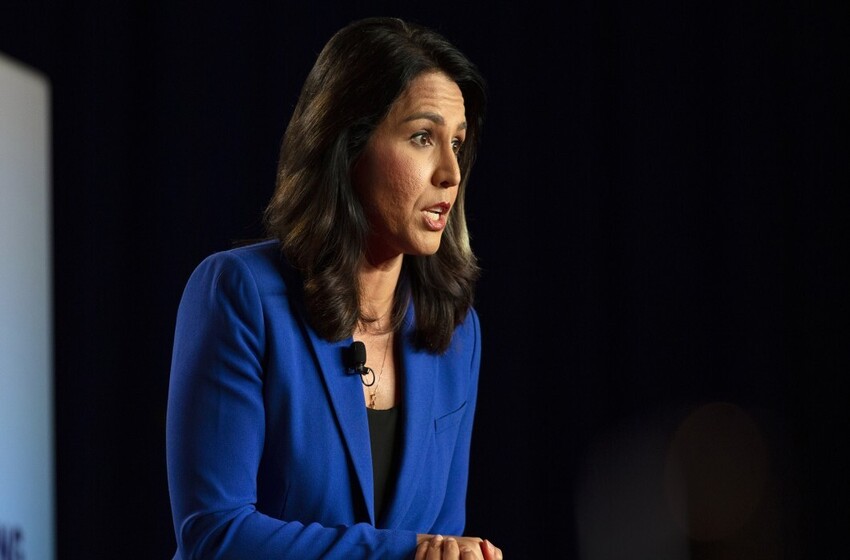 “A bold pro-life move for a Democrat”.

byW. James Antle III  8 minutes ago
Rep. Tulsi Gabbard is reaching across the aisle on her way out of Congress, raising speculation that she might have a future outside the Democratic Party.

Rep. Tulsi Gabbard is reaching across the aisle on her way out of Congress, raising speculation that she might have a future outside the Democratic Party.

The Hawaiian proposed two pieces of legislation on abortion. One would ban abortions on fetuses capable of feeling pain. The other would protect fetuses from failed abortions by ensuring “a healthcare practitioner exercises the proper degree of care in the case of a child who survives an abortion or attempted abortion.” Alexandra Desanctis, a writer for National Review who specializes on these issues, called these proposals “a bold pro-life move for a Democrat.”

Gabbard also teamed up with Rep. Thomas Massie, a Kentucky Republican who was elected with the help of the Tea Party, on a bill that would repeal the Patriot Act. While more in keeping with her civil libertarian image, she made sure the rollout was bipartisan. In a video announcement, Gabbard said the legislation “reexamines how best to strike this balance of protecting our national security interests while also ensuring that the constitutional rights of every single American is preserved.”

It’s not the first time Gabbard has been praised by conservatives of a certain stripe. Former White House chief strategist Steve Bannon called her “beyond a rock star” and a “real populist-nationalist.” A Washington, D.C., fundraiser for her Democratic presidential campaign earlier this year had plenty of Republicans in attendance.

“Tulsi has long been Trump supporters’ favorite Democrat — and not just for absolutely destroying Kamala Harris” in a debate, said conservative political strategist Chris Barron. “Tulsi seems an odd fit in the modern Democratic Party, I think she has a political career ahead of her if she bolts the party of AOC for the party of Trump. I certainly hope she does, she’s just the kind of voice our movement needs.”

The perception that Gabbard was a closeted conservative hurt her Democratic presidential bid, though as Barron mentioned, her debate exchange with Harris over her record as a prosecutor has been credited with derailing the future vice president-elect’s own campaign for the White House.

“Kamala Harris says she’s proud of her record as a prosecutor and she’ll be a prosecutor president, but I’m deeply concerned about this record,” Gabbard said as Harris looked on. “There are too many examples to cite, but she put over 1,500 people in jail for marijuana violations and then laughed about it when she was asked if she ever smoked marijuana.”

Gabbard voted “present” on President Trump’s impeachment. Only three Democrats voted no on any articles of impeachment, including one representing a district Trump won by 31 points in 2016 who still ended up losing in a landslide this election. Another switched to the Republican Party afterward.

That would be a difficult path for Gabbard. Hawaii is a solidly blue state. Republicans do occasionally win elections there, but she would be a perennial Democratic target if she somehow did so. This has led some to wonder whether the telegenic 39-year-old is looking outside of electoral politics for her next move.

“Gabbard is a shameless political opportunist who will do anything to stay in the limelight,” said Democratic strategist Brad Bannon. “Before she ran for Congress, she fought against gay rights and became a liberal when she wanted to run for Congress in a progressive district. After getting nowhere in the Democratic presidential campaign, she is shape-shifting again to position herself as a national, right-wing commentator on Fox News or Newsmax.” She has appeared prominently on Tucker Carlson’s show.

Some Democrats go a step further than this. Hillary Clinton criticized Gabbard in remarks many interpreted as claiming Russia was “grooming” the Hawaiian to mount a third-party presidential bid to undermine the Democratic ticket. Gabbard filed, and then later dropped, a defamation lawsuit against Clinton. The former Bernie Sanders backer also called Clinton the “queen of warmongers.”

Gabbard didn’t run for president as a third-party candidate, though operatives in both parties think she might have siphoned votes from Trump if she had. She endorsed Joe Biden, who is set to be sworn in as president next month.

“It’s clear that Democratic primary voters have chosen Vice President Joe Biden to be the person who will take on President Trump in the general election,” she said at the time. “I’m confident that he will lead our country, guided by the spirit of aloha, respect, and compassion, and thus help heal the divisiveness that has been tearing our country apart.”

As someone relatively young, nonwhite, the first female combat veteran to run for president, and the holder of an eclectic, though generally liberal, set of political views, Gabbard could remain an interesting figure to watch. “A lot of her supporters here were independents,” said a Republican strategist in New Hampshire. “Even people from our party” backed her.