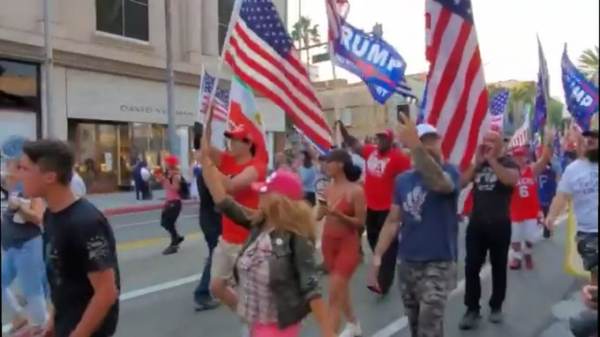 A diverse crowd of Hundreds of Trump supporters marched in Beverly Hills, California Saturday in what has become a weekly demonstration of support for the President’s reelection.

Videos and photos show a boisterous, peaceful crowd waving American flags and Trump flags, with some also waving flags of their native countries.

Happening now in Beverly Hills, large Trump rally marching down Rodeo Drive bookended by a QAnon flag in front and an “Arrest Bill Gates” sign in the rear pic.twitter.com/7Rn1yLTqvG

The rally was notably diverse. For this Black Trump supporter, her opposition to Democrats seemed to boil down, in part, to a traditional view of family structures and a belief that Democrats were responsible for the disintegration of the Black family unit. pic.twitter.com/YhW8i40sws

Some Trump supporters at the rally set up karaoke to drum up more signatures on a recall petition for Gavin Newsom.