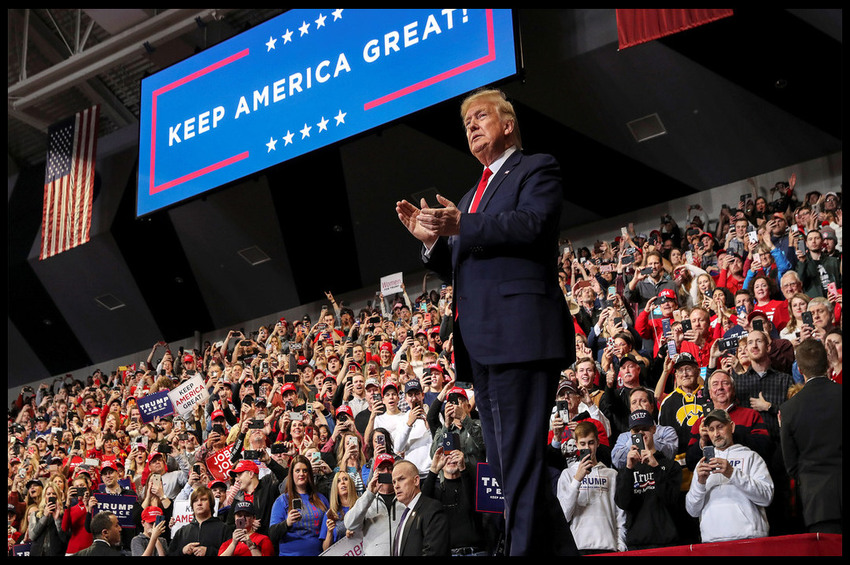 Trump’s greatest advantage in 2020 may be his most likely opponent, the unapologetic socialist Senator Bernie Sanders.

Donald Trump has at least five strong historical arguments for his reelection.

One, he is an incumbent. Incumbent presidents have won 14 of 19 reelection bids since 1900.

The few who lost did not enjoy positive approval ratings. In a Gallup poll from earlier this month, Trump enjoyed his highest approval rating since his inauguration, squeezing out a 49 percent favorable rating vs. 50 percent unfavorable.

The quagmire in Vietnam convinced Lyndon Johnson not to run for reelection in 1968. Jimmy Carter was tarnished by the seemingly never-ending Iranian hostage crisis of 1979–1981. The Iraq War drove down George W. Bush’s second-term approval ratings and helped derail his would-be Republican successor, John McCain.

Four, scandals also can destroy a presidency, as when Watergate forced the resignation of Richard Nixon.

Five, the opponent matters. Barry Goldwater was caricatured as an out-of-touch extremist and made incumbent Lyndon Johnson’s election a sure thing in 1964. George McGovern’s radicalism ensured that Richard Nixon would be reelected in 1972. Ronald Reagan was assured of a second term by Walter Mondale’s anemic candidacy.

How does Trump stack up on all such criteria?

His poll numbers have climbed steadily since Democrats began impeachment proceedings against him in September 2019. His Gallup approval rating is now four points higher than when he was inaugurated in January 2017.

Trump now has far more campaign money than he did in 2016. And unlike then, he has the full backing of the Republican Party, a mostly positive record of economic achievement, lots of campaigning and governing experience, and presidential incumbency.

True, the U.S. continues to borrow about $1 trillion per year. Trump has followed the profligate spending habits of his predecessors, George W. Bush and Barack Obama, who both dramatically increased the national debt during their eight-year tenures.

China is reeling from the Hong Kong protests, the coronavirus, the trade war with the U.S., and the global outcry over its forced imprisonment of minority groups. If the Chinese economy crashes, it could take down global commerce a notch. Both the stock and housing markets here in America are overheating. At some point, they will be due for a reset.

All that said, few economists are predicting a recession in the next eight months before the election — given the near-record employment and increased disposable income from rising wages and lower taxes. Gallup found that 63 percent of the public approves of the Trump economy — the highest rating for any president in that category over the last 20 years.

Will Trump get into a war? China, Iran, and North Korea would benefit if Trump were not reelected. Any of them might seek a confrontation over the summer to provoke Trump into an unpopular pre-election shootout.

Yet Trump’s record suggests that he is unlikely to favor preemptory attacks, nation-building, or the use of U.S. ground troops in large numbers. So far, he has used mostly air and sea power to accomplish limited objectives, without committing U.S. ground troops to the usual nasty places in the Middle East.

Scandal-wise, Trump has already been impeached by the House but was acquitted by the Senate. Special counsel Robert Mueller’s team spent 22 months and some $35 million to investigate collusion between the Trump campaign and Russia in the 2016 election — and came up short.

The more Democrats have sought to abort the Trump presidency through impeachment, congressional investigations, lawsuits, and sheer hysteria, the more Trump seems Teflon-like and his approval ratings go up.

Trump’s greatest advantage in 2020, however, may be his most likely opponent: the unapologetic socialist, Senator Bernie Sanders. The various agendas of the radical Sanders turn off a majority of the public. Even mainstream Democrats are terrified of Sanders’s redistribution schemes.

Former front-runner Joe Biden appears befuddled on the campaign trail and has been hurt by revelations about his son Hunter’s Ukrainian shenanigans.

The only other serious Democratic contender is multibillionaire Mike Bloomberg. Compared with his rivals, Bloomberg is a moderate, with unlimited financial resources and ample experience as a three-term New York City mayor.

Yet Bloomberg’s first debate was a disaster. He has variously posed as a Democrat, Republican, and Independent. His strength as a moderate in a sea of extremists was nullified by his decision to apologize for, or disown, many of the decisions that made him an effective mayor.

Bloomberg has been more reckless in speech than even Trump. Almost daily, an embarrassingly crass quote pops out of his past.

Add it all up, and if one looks at 2020 dispassionately and historically, the election appears to be Trump’s to lose.