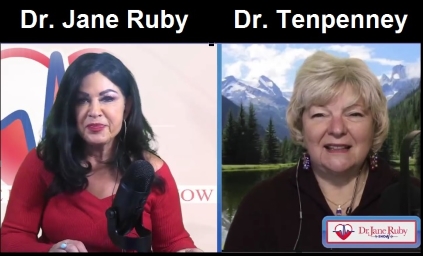 Dr. Sherri Tenpenny is someone whose work we have featured here at Health Impact News for the past 11 years. She is a doctor of Osteopathy, and has been a fierce vaccine critic for decades now.

Sherri is not one of these talking head medical doctors who have risen to fame since the experimental COVID bioweapon shots were introduced at the end of 2020, simply because they have taken a political stand against some of the criminal aspects of the COVID shots.

Most of these new talking head doctors and other “experts” still promote all the other toxic and dangerous vaccines that the CDC recommends, and many of them also still recommend the COVID shots for certain age groups, while not recommending them for others.

Some of these new “experts,” have even publicly admitted they were fooled by the propaganda, and initially took a COVID shot before realizing how bad they were.

One of these new “experts” is Silicon Valley Billionaire Steve Kirsch, who has admitted he took a COVID shot when they came out.

Kirsch puts out some good information, no doubt about that, but he is a newcomer to this topic, and so it is good to critically evaluate everything he writes, especially when it comes to “solutions.”

For example, Kirsch recently published an article on his Substack page titled: Who were the first people to publicly demand a halt to the COVID vax program?

He states: “The people who called this early are the people that the authorities should be listening to now.”

Kirsch was obviously not against the COVID shots prior to 2021, since he himself went out and got one. It seems he missed the HUNDREDS of doctors and scientists who bravely spoke out and warned people NOT to get a COVID shot in the first place, back in 2020, before the shots were even authorized.

Dr. Yeadon, however, started warning the public back in 2020, before the shots were approved, and on December 1, 2020, the day before the European Medicines Agency issued emergency use authorization for the Pfizer COVID shot, Dr. Yeadon, together with Dr. Wolfgang Wodarg, filed an emergency STAY OF ACTION with the EMA to try and stop the shots before they even began injecting them into people. Dr. Yeadon was sounding the warning even before the shots came out, that they were going to make women infertile. See:

So when Kirsch says “The people who called this early are the people that the authorities should be listening to now,” I fully agree with Dr. Yeadon being one of those, but not for the reason Kirsch gave as one of the first to “call a halt” to these deadly shots, but because he went public and and warned the public BEFORE the shots even came out.

And there are others, MANY others, who did the same thing.

I published a video on December 8, 2020, just a few days before President Trump forced the FDA to give emergency use authorization to the Pfizer shots, that someone else had produced and included dozens of doctors ALL warning the public NOT to take the shots. This video alone was viewed almost 1 million times just on the Health Impact News network. This is from our Bitchute channel.

Dr. Sherri Tenpenny was one of the doctors in this video.

But her opposition and warnings against the COVID injections went all the way back to earlier in 2020, and in May of 2020, both her and Dr. Judy Mikovits were interviewed by Brian Rose in the UK, where they predicted that the COVID shots would end up killing 50 million Americans.

I featured her testimony and Judy’s testimony from May 2020 in a video I produced in August of 2021, showing that this prediction was starting to come true, and that video has now been viewed over 11 million times on Rumble.

So when it comes to “The people who called this early are the people that the authorities should be listening to now,” should we really be making lists of doctors and others who only woke up to the dangers of the COVID shots after they were unleashed onto the public, most of whom are all pro-vaccine and many of whom were fooled into taking a COVID shot when they came out?

Or should we be listening to the doctors and other scientists who have been warning the public for over a decade about the dangers of ALL vaccines, and saw through the COVID-19 “vaccine” mind control propaganda from the beginning, and risked their careers and livelihood to warn the public before the shots even came out?

The politician talking heads who have recently jumped on the “COVID shots are bad” bandwagon, such as U.S. Senator Ron Johnson and Florida Governor Ron DeSantis, why is it that when they put together their “round table” panel of “experts,” they never include any of these doctors who have been warning the public for many years how bad all vaccines are, and were the actual first ones to warn the public about the dangers of the COVID-19 bioweapon shots, such as Dr. Tenpenny did, before they were even authorized?

Then there is Dr. Jane Ruby, and I have to confess she has flown under my radar up until now, even though we did give her credit for breaking the huge blood clot story from funeral home director and embalmer Richard Hirschman, who sent samples of what he was pulling out of dead bodies to Mike Adams to examine in his laboratory. See:

The reason I have not included Dr. Jane Ruby in my newsfeed is because most of the time I saw her she was appearing on shows on networks that are part of the Conservative Right, where all too often these pundits want to make the COVID-19 bioweapon shots a false fight between the Left and the Right, and blame everything on Biden and democrats.

Plus, they have attacked Health Impact News when I have called out their alliances to Big Pharma and the very manufacturers who produced these deadly shots.

So when I saw that Dr. Ruby had interviewed Dr. Sherri Tenpenny, I decided to do some research on her. Here is her bio from her website:

Dr. Jane Ruby is a medical professional and a pharmaceutical drug development expert with over 20 years of experience in regulatory processes for drug approval with the FDA and the EMA. She is also a published international health economist who has appeared on numerous TV and radio shows across America. Dr. Ruby worked on the human research studies to launch some of the most famous compounds in the world in Depression, Alzheimer’s disease, Addiction, and Cardio-pulmonary diseases.

Formerly a Washington DC health economist and New Right political pundit with fascinating conservative insights and breaking news in the world of New Media, her radio and online TV Show, “Dr. Jane’s DC” she provided current views into the fascinating world of our nation’s capital and the people in it. Dr. Ruby was most recently Sr Advisor to the 2018 Stewart for U.S.Senate campaign, and an Associate Producer of newly released movie, “Hoaxed: The Media’s War on Truth.”

Her book, “A Sea of New Media” illustrates the emergence of a new generation of journalists  – truth tellers  – the citizen journalists. From cable news to the New Media, she takes us through the transitions and features the people that are driving this new phenomenon in journalism. As a former television host in Washington, DC she observed the transformation of the American press from mainstream conglomerates to a citizen based press. Your camera, your smartphone, your social media capability makes you just as powerful in breaking a story as ABC, NBC, FoxNews or the New York Times. (Source.)

She lives in Florida, and is therefore a credible source of information about Governor Ron DeSantis and his alleged opposition to the COVID shots. She is the first person I have come across, other than myself, who sees right through the hypocrisy of Ron DeSantis, and his lack of actions to use his executive powers in Florida to protect his constituents from these bioweapon shots.

Here is an 8-minute clip (it is actually less than 8 minutes as the last part is a commercial for some products she is selling) from her show titled: “Is Gov. DeSantis’ War On Pharma Real?” And then she has a longer rant on this topic you can listen to and watch here.

So as far as I can tell, Jane Ruby is the real deal, following the truth wherever it leads, and she will be in my newsfeed going forward.

As I have mentioned many times in the past when sharing external sources from other producers and writers, it is so important to not discount people simply because you find one thing, or maybe more than one thing, that you disagree with.

Truth is truth no matter who is speaking it, and we can often throw away truth if we judge people too quickly based on their associations, or some positions they hold that you don’t agree with.

One of the things I disagree with Dr. Tenpenny about, is her belief in transhumanism, and that these shots can turn us into something other than human beings, and her lack of faith in believing that people who have been injected with a COVID-19 shot can be completely healed.

Much of this false belief seems to be from not understanding all the fraud surrounding genetics, and the concept of DNA. I have covered this topic over the years, and I need to write an updated article on this post-COVID, but here are some articles we have published in the past 10 years that debunk this belief that our DNA can be altered to the point where we morph into some other kind of species that makes us “non-human.” That is the stuff of science fiction, not real science.

Dr. David Martin Exposes the False Foundation of Eugenics: “You Don’t Have DNA”

The False Gods of Genetics and “Gene Therapy”

If you search through PubMed for the term “dna repair”, you will get over 100,000 results in the peer-reviewed medical literature.

One of the other doctors that Dr. Jane Ruby frequently interviews, is Dr. Ben Marble, and he recently mentioned how there is even a study out of Harvard that shows prayer can alter one’s DNA, and that therefore total healing from COVID-19 “vaccine” injuries is totally possible.

Dr. Jane Ruby’s interview with Dr. Sherri Tenpenny is spread out over 3 videos on her Rumble channel. I have combined them into one video and abridged them down to under 25 minutes.

Dr. Sherri Tenpenny is not new to this topic, and so I highly recommend watching this video as they summarize where we are today with the COVID-19 shots, and what is likely coming in the future as we head into 2023. These two doctors are not looking to score political points or win popularity contests, as far as I can see, and are far more concerned with providing truth to educate the public.

This is on our Bitchute channel, and will also be on our Odysee and Telegram channels.