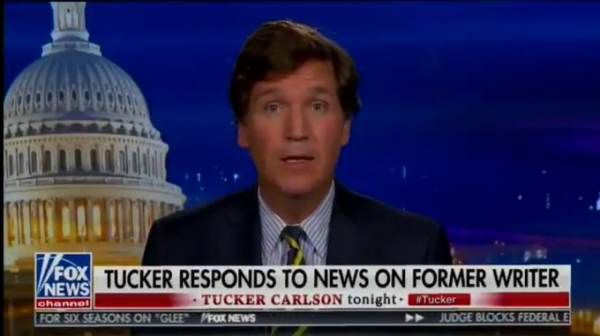 Carlson said Brian Kilmeade would be filling in the next four nights and that taped segments would be shown. Carlson held out the possibility of returning sooner “if something dramatic happens”.

Carlson addressed the resignation of Neff and his own vacation plans in separate segments on Monday’s show.

Here’s how @TuckerCarlson addressed his former top writer Blake Neff’s resignation for having secretly posted racist and sexist material on an online message board. pic.twitter.com/Kle9kkNygx

Tucker Carlson, on his (now former) head writer being exposed as a racist, sexist troll: “…to the ghouls now beating their chests in triumph at the destruction of a young man, that self-righteousness also has its costs.” His monologue: pic.twitter.com/XMa7O4FV6Z

Annnnnnnnd Tucker Carlson announced he’s taking a “long-planned vacation” at the end of his show. pic.twitter.com/6TjtGXlvwE

Excerpt from CNN’s report on Neff:

…Just this week, the writer, Blake Neff, responded to a thread started by another user in 2018 with the subject line, “Would u let a JET BLACK congo n****er do lasik eye surgery on u for 50% off?” Neff wrote, “I wouldn’t get LASIK from an Asian for free, so no.” (The subject line was not censored on the forum.) On June 5, Neff wrote, “Black doods staying inside playing Call of Duty is probably one of the biggest factors keeping crime down.” On June 24, Neff commented, “Honestly given how tired black people always claim to be, maybe the real crisis is their lack of sleep.” On June 26, Neff wrote that the only people who care about changing the name of the NFL’s Washington Redskins are “white libs and their university-‘educated’ pets.”

…while working at Fox News, and while a reporter at The Daily Caller, Neff was a frequent poster on AutoAdmit. Also known as XOXOhth, it is a relatively unmoderated message board like 4chan aimed at lawyers and law school