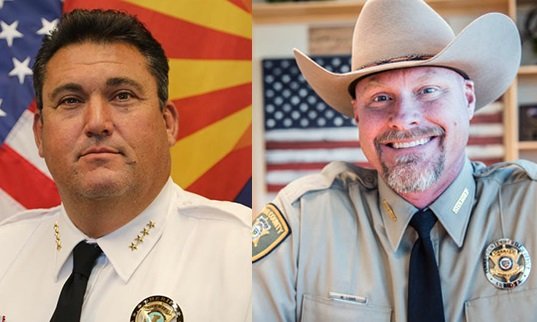 Two Arizona county sheriffs are refusing to enforce Gov. Doug Ducey’s stay-at-home order, asserting that it would be a violation of their oath and the Constitution.

Mohave County Sheriff Doug Schuster and Pinal County Sheriff Mark Lamb have both said that they will not make arrests or fine people who do not comply with the order.

“My conscience will not allow me to arrest someone who is trying to make a living,” Schuster told The Arizona Republic. “I don’t believe it is a crime to try and make a living.”

“I don’t think, for the most part, people want to be defying (the order),” the sheriff added. “They’re trying to do what’s best for their families.”

Schuster explained that he feels that enforcing the order is a violation of the Constitution.

“If I were to consider enforcing that, I would be in violation of my oath,” he told the paper. “That is something I cannot do.”

Lamb added that he thinks that people “want to know that we’re going to support their constitutional rights.”

“I felt (Ducey) pushed me into a position where I needed to make our stance clear,” he told the paper.

“The numbers don’t justify the actions anymore. Three hundred deaths is not a significant enough number to continue to ruin the economy,” he also said.

The Arizona stay-at-home orders were implemented last month, but have now been extended through mid-May — though some businesses have been allowed to reopen. Governor Ducey has said that law enforcement should begin handing out Class 1 misdemeanors for those who do not comply, which means a $2,500 fine and up to six months in jail.

There have been 360 deaths in Arizona from the virus as of Sunday.