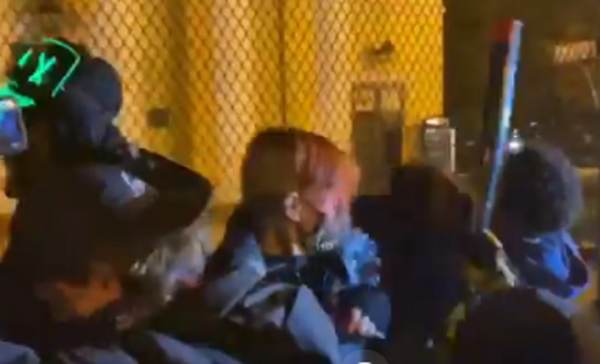 Two “protesters” in DC have been arrested after a violent mob attack, during which a man was hit in the head with a baseball bat.

The shocking violence was captured on video by livestreamer Brendan Gutenschwager.

In the footage, a group of black bloc clad Antifa militants are seen attacking a man who was dressed like a normal human being.

A law enforcement source confirmed to TGP that two were arrested following the attack.

Proud Boys founder Enrique Tarrio tells Gateway Pundit that he was slashed in the stomach, Beatty was stabbed in the back, and multiple other members of the men’s social group were stabbed and are now hospitalized with serious wounds.

A law enforcement confirmed to TGP that the group was walking down the street, away from the protests, when they saw an older man being stabbed and intervened.

“We were helping some guy that was getting stabbed by two black males and one female. Bevelyn got stabbed as well as two Proud Boys and the guy they were attacking. I got slashed, but it’s not serious. We were walking to our cars,” Tarrio explained.

No arrests have been made at this time.