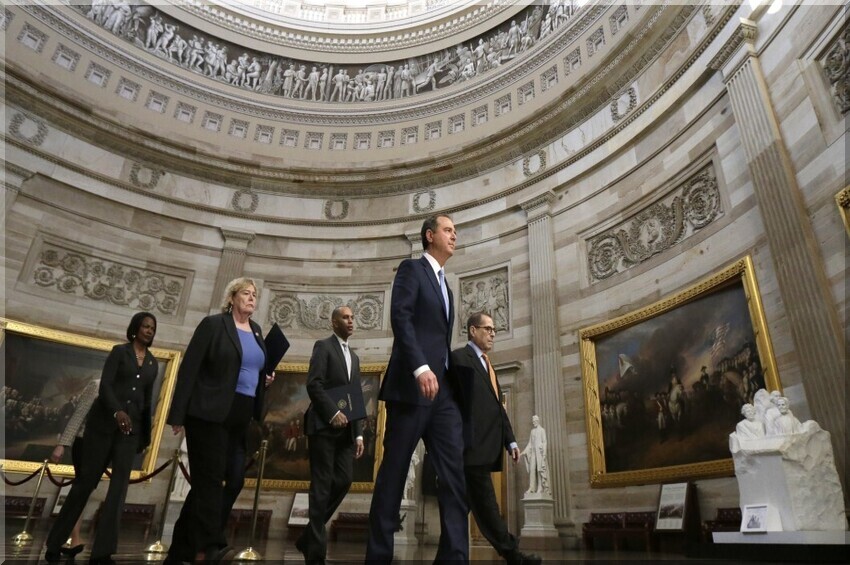 “The Senate should immediately remove President Trump from office to prevent further abuses,” they continue. “He is an immediate threat to the nation and the rule of law. It is imperative that the Senate convict and remove him from office now.”

Democrats insist on Trump’s immediate removal because, they argue, he was the knowing beneficiary of Russian help in the 2016 election, and if he is not thrown out of office right now, he will do it again. But in making their argument, Democrats make two critical mischaracterizations about Trump, Republicans, and 2016. One is flat-out wrong, while the other is misleading.

The problem is, the theory does not hold that Russia “did not interfere” in the 2016 election. There is a mountain of evidence that Russia interfered, and that has been the conclusion of every investigation into the matter, beginning with the first congressional probe, by the House Intelligence Committee under then-chairman Devin Nunes. The theory is that in addition to Russian interference, some people in Ukraine, including some government officials, also tried to influence the U.S. election. It was not a government-run effort, and it was on a far smaller scale than the Russian project, but it happened.

Trump and his supporters have long pointed to the example of Ukraine’s interior minister, former prime minister, and ambassador to the U.S. taking to social media to condemn Trump during the campaign. They also point to a Ukrainian Parliament member’s attacks on Paul Manafort and efforts to publicize a “black ledger” that contained an unverified allegation about Manafort being paid in cash for work in Ukraine. They also point to connections between anti-Trump figures in Ukraine and Fusion GPS, the American opposition research firm behind the sensational and false Steele dossier. Finally, they point to the mysterious actions of a Democratic National Committee employee who kept in touch with anti-Trump elements in Ukraine.

None of that is definitive, but it is also not debunked. And it is not a denial of Russian interference but a recognition that in addition to that interference, some in Ukraine also tried to influence the election.

The other mischaracterization in the Democratic brief is the assertion that, in 2016, Trump “welcomed Russia’s election interference.” The brief quotes special counsel Robert Mueller’s report that the Trump campaign welcomed Russian help because it “expected it would benefit electorally from information stolen and released through Russian efforts.”

Perhaps people have forgotten how prominently media organizations featured the Russia-based material. If they have, here are a dozen examples of headlines, just from the New York Times and just from the few weeks immediately before the 2016 election:

(The headlines are from the paper’s print edition, as preserved in the Nexis database; slightly different headlines might exist in web editions.)

The Times editorial board even argued that the WikiLeaks disclosures showed Clinton should have been more open with the public in the months before the election. “Fuller disclosure would clearly have helped her when it came to her lucrative speeches to Wall Street,” the paper wrote in an editorial headlined, “A WikiLeaks Lesson for Mrs. Clinton.” “Imagine if months ago, Mrs. Clinton had done her own giant information release.”

Of course, the Times was not the only media organization to trumpet the Russia-based leaks. They all trumpeted the Russia-based leaks. Everyone was complicit. And that is what makes the Democratic charge against Trump so misleading. He wasn’t welcoming something that everyone else was condemning. He was welcoming something that everyone else was welcoming, too. And now, in retrospect, that is a terrible offense, part of the foundation for removing the president from office?

Neither mischaracterization in the Democratic brief is a mistake; Democratic prosecutors know full well what actually happened. But the mischaracterizations are necessary to build the case against the president, to show that he had corrupt motives in the Ukraine matter. They are, of course, not the entire case, but they are important. And they are wrong.