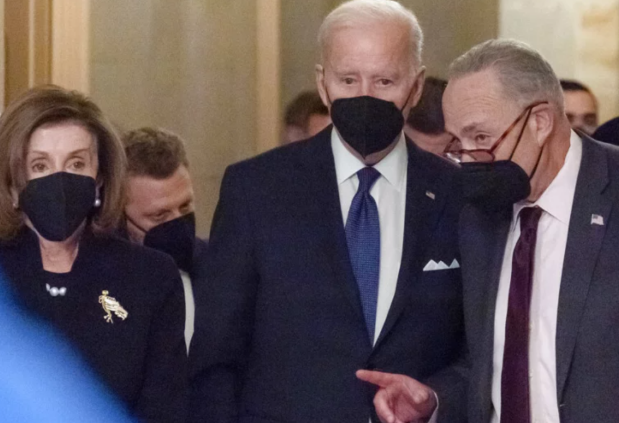 Divided government is good — except when it stops a divisive, destructive Democratic administration from continuing to run the country into the ground. That is the message from Doyle McManus, the Washington reporter for the Los Angeles Times.

McManus says divided government has been a good thing “sometimes” because it offers “a constructive check on executive power” and an “opportunity for bipartisan deal-making.” That won’t be the case if Republicans win the House in the midterm elections, though. Why? Apparently, because Republicans are just bad, or so he feels.

‘WE THE DEMOCRATS’ ARE ‘THE ONES THAT ARE FISCALLY RESPONSIBLE,’ BIDEN SAYS

McManus adds, “Of the likely members of the next majority, well more than half have questioned or denied the legitimacy of the 2020 presidential election.”

Of course, this will only bring the GOP closer to the election-denying antics of the Democratic Party, which has had many members deny the legitimacy of the 2000, 2004, and 2016 presidential elections. They still deny the result of the 2018 Georgia gubernatorial election.

Well, we can all hope. After all, what has “serenity” gotten us in the last two years? The Democratic House majority and the Senate have been content to let Biden usurp the legislative powers of Congress and thus subvert democracy. That includes Biden’s student debt amnesty, which he now ludicrously claims was passed through Congress as a bill.

In April, Nancy Pelosi recognized that the president “does not’ have “the power for debt forgiveness.”

Considering the damage that Biden and the Democratic Congress have done to the country with their inflationary spending and mismanagement of natural resources such as oil and gas, has McManus considered whether “fighting the Biden administration to a standstill” might not be a good thing? After all, Biden wanted Democrats to spend even more than they ultimately did. Republican resistance probably saved him from making inflation far worse than it is now.

In essence, McManus seems less concerned about divided government than he is about maintaining unified Democratic control, no matter how awful the consequences are for the entire country. The decay caused by single-party Democratic rule may be acceptable to people in California (then again, many of them are moving out), but the rest of the country has decided that just two years of unified Democratic government is way more than enough.

Voters know they are getting a combative GOP, and they are gladly choosing it anyway if the polls are to be believed. Perhaps McManus and other Democratic partisans should ask themselves why.