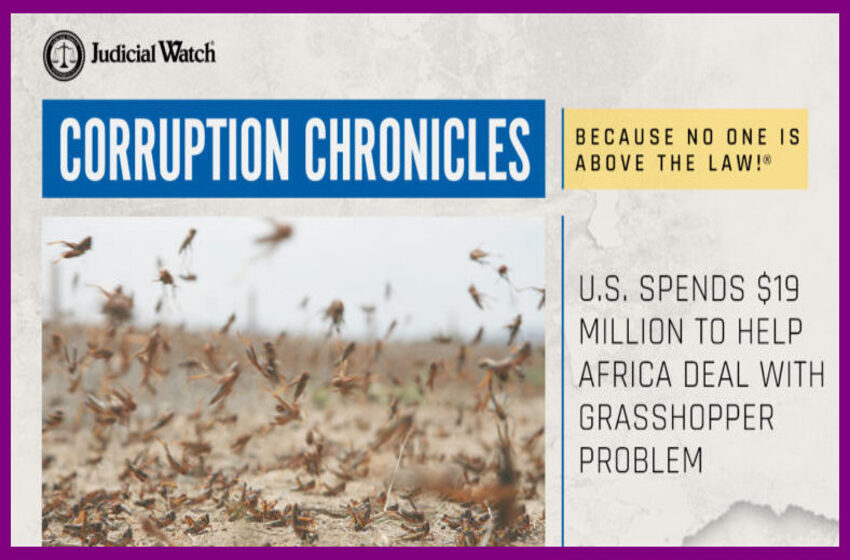 In the middle of a health and financial crisis that is crushing the economy and millions of American lives, the U.S. government is dedicating a mind-boggling $19 million to help Africa deal with a grasshopper issue. Known as locusts, the short-horned grasshoppers are reportedly invading the East African nations of Ethiopia, Kenya and Somalia, qualifying the taxpayer allocation as “humanitarian assistance” that will reduce the size of the swarms and have a positive impact on affected communities throughout the Horn of Africa. At least that is what federal officials are saying during these most difficult times at home.

The money is flowing through the United States Agency for International Development (USAID), the massive conglomerate with a $40 billion budget that annually doles out monstrous sums to foreign causes, including a multitude of leftist groups around the globe. “The current outbreak of desert locusts is the worst to hit East Africa in decades: billions of pests are infesting the region and devastating vegetation and livestock pastures,” according to a recently issued USAID statement announcing the latest multi-million-dollar allocation. “The new funding will finance ground-based and aerial operations to detect and control locusts across the region. These programs are critical to mitigating a potentially larger impact on people’s ability to earn a living and provide food for their families in the future.”

In addition to supporting immediate locust-control efforts, the agency reveals that it is providing long-term funding to protect food security and livelihoods for the people of East Africa as well as to strengthen the country’s capacity to detect, track, report on and monitor locusts and other agricultural pests. The U.S. has also kicked in hundreds of thousands of dollars to train hundreds of “pest experts and scouts” and provide them with protective equipment for “desert locust control operations in Ethiopia.” Besides the generous cash contributions, Uncle Sam has deployed “disaster experts” throughout Africa to evaluate humanitarian needs and coordinate response efforts with local governments and aid organizations. The idea is to “determine whether additional assistance is necessary based on assessments made on the ground,” USAID says, encouraging other donors to contribute funds to address the immediate needs of Africans.

An offshoot of the famously corrupt United Nations known as the Food and Agriculture Organization (FAO) says it will require a lot more money to tackle the African grasshopper crisis and it expects the U.S. to step up to the plate as it often does with global humanitarian situations. The FAO wants an eye-popping $153.2 million, even though officials agree that “locust infestations have not immediately impacted food security.” At the beginning of 2020, the FAO determined that it would cost $138 million to deal with the grasshoppers in Africa, but the price increased by $76 a month later. The world body evidently did some math and concluded that a lot more cash is needed to adequately “scale up efforts to curb the spread of desert locust swarms, protect livelihoods and bolster early recovery, and improve response coordination and preparedness.” As of March, the biggest threats appear to be bands of hoppers—immature, wingless locusts—and swarms of adult locusts devouring vegetation in multiple areas, according to USAID assessments.

The U.S. government has long contributed to this cause, but the expenditure seems especially outrageous as the coronavirus pandemic slams the nation’s economy and millions of Americans apply for unemployment. Decades ago, USAID launched a handsomely funded program called Assistance for Emergency Locust/Grasshopper Abatement (AELGA) to help Africa, the Middle East and Southwest Asia curb invasions. Government officials assert that AELGA’s overall objective is to help establish and strengthen national and regional capacities to prevent and control locusts and minimize the adverse effects of pesticides to humans and the environment. For the helplessly bored, USAID makes detailed annual reports available on the invasive insects’ migratory and breeding patterns as well as pesticide monitoring efforts.