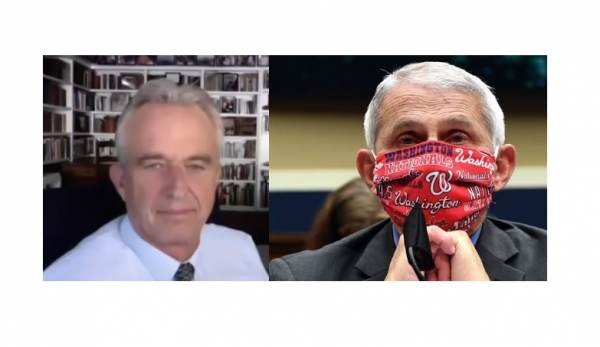 Robert Kennedy Jr. and Harvard Attorney Alan Dershowitz debated on the topic of the coronavirus vaccine back in July.

During the debate, Kennedy Jr. claimed that Dr. Anthony Fauci invested $500 million in the vaccine that is not safe by any means and Fauci owns half the patent so he’s due to make millions.

In an earlier report we reported on Bobby Kennedy Jr.’s comments about Big Pharma and the increase in vaccines in our culture back in April.  Kennedy shared the story of how Dr. Fauci fired and led the indictment of a brilliant assistant who blew the whistle on the harmful consequences attributed to vaccines.

We also reported on this doctor, Dr. Judy Mikovits who was a young doctor with a promising career until she began raising concerns about what she considered to be the potentially harmful consequences of vaccines.  Dr. Mikovits explained how she was jailed during this time period with charges related to her removal of lab notebooks, a computer, and other material belonging to the institute. These charges were ultimately dropped.  Her video has since been taken down by YouTube.

In the debate with Alan Dershowitz, Bobby Kennedy Jr. shared:

I think it is really important for our democracy to be able to have spirited, civil discussions about important issues like this.  This is an issue that has been on the news 24 hours a day for the last four months and yet there’s no debate happening about this.  It’s all repetition of orthodoxies and government proclamations and democracy functions only when we have free thought and information.  Democracy is best often crafted in a furnace of heated, spirited debate.

Kennedy thanked Dershowitz for joining him and then stated that when he was young, Americans had faith in the medical community but now roughly 50% of Americans don’t want to take a coronavirus vaccine.  The reason for this may be because the actual rate of serious harm from vaccines is 2.4%.  There’s a 1 in 40 chance that you will get injured by vaccines and today’s kids have to take up to 70 vaccines.

Big Pharma was protected from being sued for their vaccines which is why they exploded in use.  So now today not a single vaccine has been tested against a placebo and Big Pharma is pushing through the coronavirus vaccine at a record pace, despite numerous individuals in the initial testing sample getting violently ill and the testing given to the healthiest people in the country.