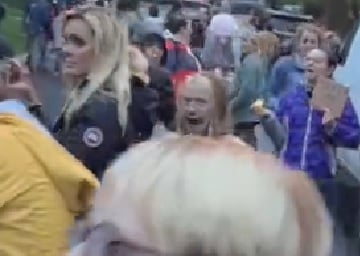 A screengrab appears to show a demon in the crowd. USASupreme originally posted on this.

Here is the video in question. The image appears at the 15-second mark.

There is nothing wrong with protesting in public spaces outside the homes of justices who refuse to be held accountable for the decisions they make affecting every American.

The Gateway Pundit searched other videos from the event. What we can confirm is two girls were walking together and chanting during the protest outside of Roberts’ home.

They were seen walking together. They can be seen here in this video.

We are not saying the girls are demons.  We are reporting a demon-like image appears in the screengrab. In fact, the demon looks nothing like the female protester in the video.  So how do you explain this?

So what happened? What transformed one of the women during that instant?

The post Unedited Screengrab from Video of Pro-Abortion Protesters Outside John Roberts’ Home Appears to Show Demon in the Crowd appeared first on The Gateway Pundit.