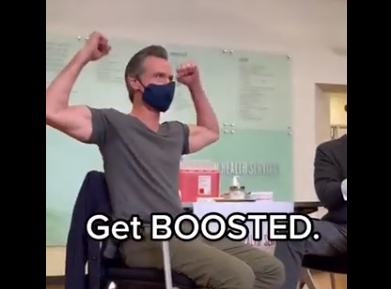 California Governor Gavin Newsom has disappeared from the public since getting a Covid booster shot.

Newsom got a Covid booster on October 27 and posted video of him getting the jab online.

Newsom abruptly cancelled his trip to Scotland and hasn’t been seen since he got the booster shot.

The California governor was supposed to participate virtually in the climate summit but he didn’t make it.

According to the Associated Press, Newsom has been dealing with ‘family issues.’

Newsom’s wife defended his absence in a since-deleted tweet.

For those consumed by the “What happened to Gavin Newsom” rumors, the Rosetta Stone here is his wife’s bizarre/angry tweet which she then deleted. I’ve 0 idea what the truth here is (I doubt will will ever know because journalism is dead), but this is evidence SOMETHING is amiss. pic.twitter.com/RgzYB6ZSTF

It appears Gavin Newsom and the ‘First Partner’ of California may have attended an extravagant wedding.

Is this why Newsom canceled all of his scheduled appearances or is it something else?

So, Twitter, is this @GavinNewsom? In the 1st pic, look to the right of the bride, to the couple in the 2nd row I think it is. Gavin and Jen, next to London Breed? In the 2nd pic, look behind the bride’s dad. Bride is Ivy Getty. https://t.co/kUOcWI5NQApic.twitter.com/tZu9HeeDJC