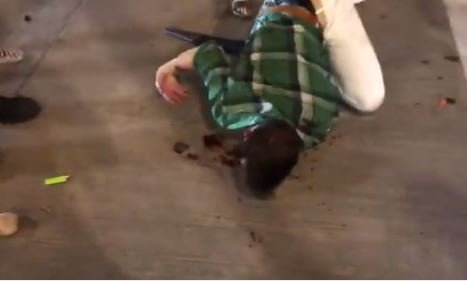 New video has been posted and a police update given in the savage beating of a man Saturday night in Dallas by rioting Black Lives Matter and Antifa protesters. The man, whose body was seen left in a bloody, twisted mess after the mob beating, is in the hospital according to police who reportedly said the victim is in “bad shape, but hanging on” and in stable condition. Police also said the victim was trying to protect his neighborhood and confronted the protesters while carrying a machete. Police cannot confirm if he is a store owner.

After being knocked out by a rock to the head, the victim came to while being aided. 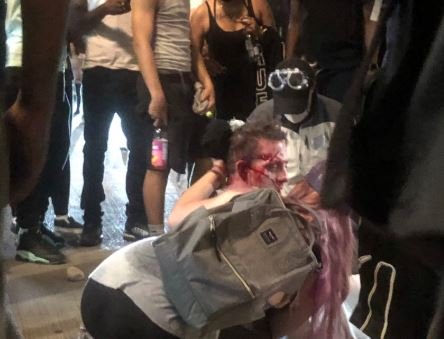 Two new versions of the attack have been posted. One starts earlier in the attack and shows the man being pelted by rocks.

This version from someone in the mob shows the coup de grace rock to the head and someone stealing his wallet from his back pocket.

The full story is he assumed they would loot his store and ran aggressively with sword towards someone and hit him and then they beat him. IF YOURE GOING TO USE VIOLENCE THEN EXPECT IT RETURNED pic.twitter.com/44gq2Bf31Y

Longer version by the poster of the earlier video:

Full unedited video for editorial requests. Please attribute to Elijah Schaffer of Blaze TV. I cannot confirm he was the store owner, but I pulled out my camera when I saw him appearing to defend a store, then he was rushed, then made the move that might have cost him his life pic.twitter.com/8oGa2obBbp

Dallas Morning News reporter Cassandra Jaramillo posted to Twitter what she was told by the Dallas police:

“DPD source tells me man who