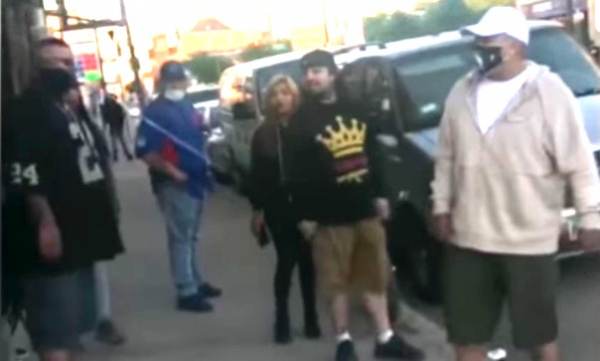 As more and more people take matters into their own hands to deal with the looters and rioters, even the Latin gangs in Chicago are coming off looking like the good guys, as they are fighting off the looters. It appears as though several shootings took place, as you can hear shots ringing out as people start scattering.

It appears as though this took place in Cicero, just west of Chicago.

Four people shot, two fatally, in Cicero Monday as unrest and protests over the killing of George Floyd continued for another day.

Hanania said there have been “outside agitators” that have entered Cicero “after being rebuffed by the closure of downtown Chicago. The only shots fired have been by these outside agitators and looters who are not Cicero residents.”

The identities of the people who were killed have not yet been released. No further information was provided.

During a night of unrest in Cicero that left two people dead, some residents say police officers allowed Latino gangs to patrol the community with bats and crowbars to fend off looters.

There also were reports on TV and social media of business owners on rooftops with assault rifles and other guns ready to prevent destruction of their businesses.

Shapearl Wells, an African American resident of Cicero, said she and her family were targeted Monday afternoon on Cermak.

It happened first to her cousin, who was driving out from Chicago to visit her. She was at a red light on Cermak Road and Central Avenue when a group of men approached the cousin’s car.

She told Wells what happened when she