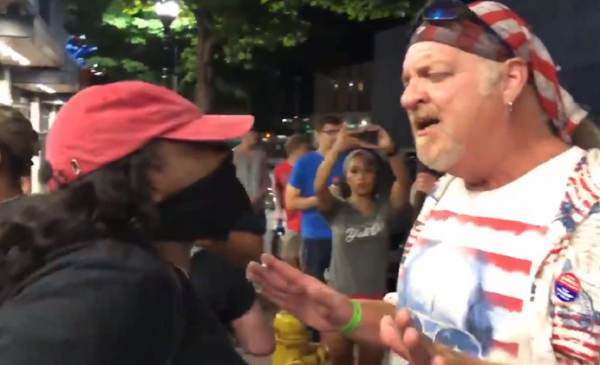 violent Black Lives Matter “protester” was caught on camera threatening to assault a supporter of President Donald Trump as he attempted to leave the Tulsa rally.

“I’m gonna beat yo ass,” a confrontational “protester” shouted at a Trump supporter leaving the rally.

The woman ignored social distancing guidelines as she got in a man’s face and began screaming obscenities at him.

“Why are you screaming at me?” the ultra calm Trump supporter asks the unhinged woman, causing her to melt down even harder.

“I will lay your old ass out,” the woman with zero self-control said.

The deranged woman continued to rant and rave, repeatedly threatening the man as he refused to back down — and dared her to hit him.

The mobs of “protesters” have been harassing Trump supporters throughout the day, blocking streets, throwing liquids at them, and hitting their cars with fists and projectiles. The National Guard is on the scene attempting to prevent violence like we have seen in cities across the US in recent weeks.