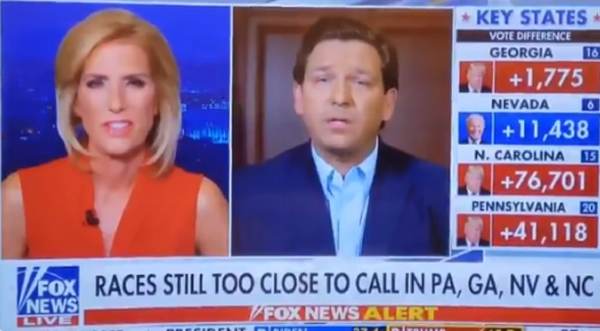 Gov. DeSantis was appearing on The Ingraham Angle on Thursday evening when he asserted that Fox News “would not call Florida even though it was so blindingly obvious that he won it big,” but did not hesitate to call to “call Arizona very early.”

“It seems to me that there has been more of a rush to call states for Biden and create a narrative that Biden is the rightful winner,” DeSantis added.

HOT SEAT once again for not calling FL (states for Trump) in a timely manner BUT when it was Biden – they quickly called a state. This is a future President in the making. FOX blew it 11/3/2020 pic.twitter.com/ixeePbcGMj

Arizona was called early for Joe Biden by multiple networks and news outlets, including Fox News. However, it remains up for grabs by the Trump campaign.

As the Gateway Pundit reported earlier on Thursday, Maricopa County, Arizona, released 73,976 more ballots shortly after 9 p.m. and 56.1 percent of them were for President Donald Trump!

This number is right on track for what President Trump needs to prevail in the state, especially after overperforming in the liberal stronghold of Pima County.