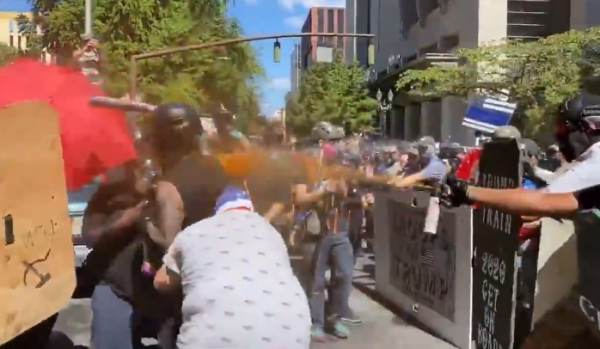 Portland became a battleground on Saturday as patriots clashed with the militant left Antifa and Black Lives Matter rioters.

In one of the more hilarious videos to come out of the chaos, a Black Lives Matter militant can be heard whining about how the police are “just standing there” as the extremist leftists got their butts handed to them by the patriots.

The day was filled with violence, as both sides fired off pepper spray, projectiles and took swings at the other. For once, the patriots actually outnumbered the violent left.

“When the cops are gone, you’re gonna deal with us,” one of the patriots was filmed warning the anti-cop leftists.

When the cops are gone, you’re gonna deal with us

The patriots also destroyed the snack van that has been a staple at the Portland riots for the last few months.

Patriots may have slashed the snack van’s tires – I’m sure Goodyear will help them out tho #Portlandpic.twitter.com/ShRSRJg4xS