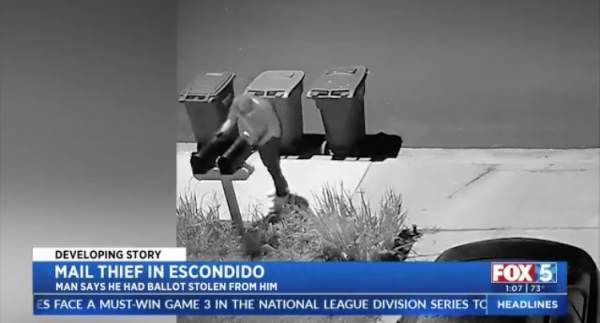 A thief was caught on surveillance video this week grabbing mail and election ballots from people’s mailboxes in Escondido, California.

“It was a younger looking man, happened to come down the sidewalk. He was wearing a ball cap, face mask, gloves. (He) carefully opened up our mailbox and took out all of our mail,” homeowner David Sprouse told FOX 5, sharing his surveillance video.

The suspect is still at large.

A mail thief moving through a North County neighborhood snatched up ballots along with the other contents of mailboxes lining the street, leaving residents concerned ahead of Election Day.

David Sprouse’s surveillance cameras captured the man stealing his mail, and several of his neighbors’ as well, in the Summer Creek area of Escondido just before midnight Tuesday.

The next morning, a resident on the block found a pile of mail from houses up and down the street — including some ballots — sitting on a car nearby, apparently discarded by the thief. She was able to return those parcels to their proper addresses.

Sprouse said it wasn’t until the following morning when he found out his mail was stolen and he checked the security recording. He says it was surprising this happened on the same day ballots were delivered, and that it was the first time in at least 10 years somebody has stolen his mail.

Vote in person if you want your vote to count.

A New Jersey mail carrier was arrested and charged for dumping mail, including election ballots, the US Attorney’s office in the District of New Jersey announced Wednesday.

Earlier this week, Virginia election officials put out a statement warning the public that ballots may have been stolen when 6 mailboxes were broken into over the weekend.