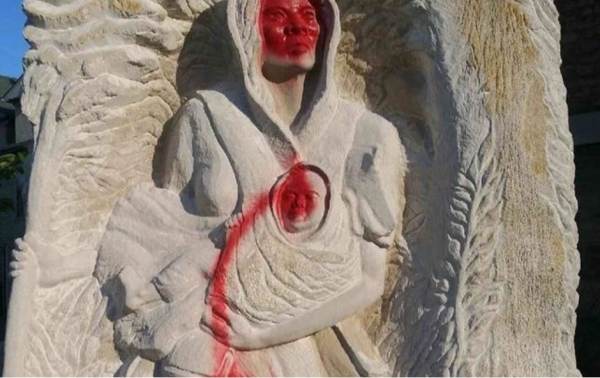 Idiotic Black Lives Matter supporters have vandalized a statue of a slave fleeing with her infant daughter outside a black church in New Albany, Kentucky.

The faces on the statue were painted red, similar to what we have seen done to statues of Confederate generals and Christopher Columbus, and tagged with “BLM.” Ironically though, the statue at the nearly 170-year-old Second Baptist Church is of former slave Lucy Higgs Nichols, escaping slavery with her baby.

The church was known for helping slaves who were fleeing during the civil war. Higgs Nichols went on to become a nurse in the Union Army.

The church is now putting up security cameras to keep an eye on the statues and the church itself. A GoFundMe campaign to help has raised nearly $5,000.

“All community donations, just people saying, ‘I want to help,‘” Friends of the Town Clock Church Treasurer Jerry Finn explained to WAVE 3 News. “What it will allow us to do is put cameras in place to monitor the gardens and the church as well.”