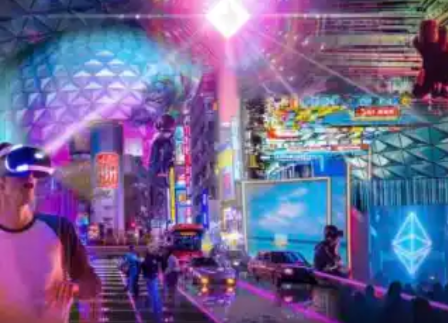 If you go through the documents about the conference now available online, you will see words like governance, regulation, and inclusivity.

If you don’t already know, WEF president and founder Klaus Schwab has always worked closely with China and admires their system as a perfect model of governance.
The Metaverse

The word Metaverse has undergone a transformation. It first appeared in a 1992 dystopian novel, Snow Crash, as a portmanteau of meta and universe. It was a deeply dystopian novel of a collapsed America that is overrun by violence and poverty.

Metaverse has mostly referred to cyberspace, including virtual reality.

According to Wiki, in science fiction, the “metaverse” is a hypothetical iteration of the Internet as a single, universal, and immersive virtual world that is facilitated by the use of virtual reality and augmented reality headsets.

In colloquial usage, a “metaverse” is a network of 3D virtual worlds focused on social connection.

The word has been expanded to include a vision of what the Internet will become, i.e., “a single shared immersive, persistent, 3D virtual space where humans experience life in ways they couldn’t in the physical world.”

The WEF now has Metaverse in its sights. It has the potential to keep track of everyone and control people globally if they have the Internet.

WEFers say their mission is:

Defining and building an open and inclusive metaverse

The World Economic Forum is committed to bringing together leading voices from the private sector, civil society, academia, and policy to define the parameters of an economically viable, accessible, and inclusive metaverse.

We aim to foster collaboration among multiple stakeholders to build the metaverse in an integrated and open way and to help it fulfill its promise by transforming consumer experiences and business models across industries.

“The World Economic Forum is bringing together leading voices from the private sector, civil society, academia, and policy to define the parameters of an economically viable, interoperable, safe, and inclusive metaverse, focusing on two core areas: governance and economic and social value creation.”

That will include Big Tech, banks, some politicians, companies, and, get this, Interpol, the UN counter-terrorism office, US NIH Genome Research Institute, and more.

This was discussed at their last Davos conference. As Schwab said, “The metaverse will influence the way people, governments, companies, and society at large think, work, interact and communicate for the purpose of collectively addressing issues on the global agenda.”
The De-Growthers

These people are de-growthers and de-populationaists. We will all go back to a time without modern conveniences, but we can turn on our devices to live in a far better, recreated virtual world resembling the real world – the Metaverse.

The elites will still eat steaks, fly around, and drive, but we won’t, and we won’t leave the house much, either. We will get to live in their alternative universe without leaving our couches. The peasants can become the ultimate couch potatoes when not working like slaves for the elites.

They’re building back better, using climate change as their cover. It could be very entertaining, but it also sounds dangerous and addictive. It could become a place where people cater to their worst impulses. It will deform reality. Escaping reality for the invented one is dystopian by its nature. Look at how Big Tech and the government are using the Internet now and tell me convincingly that this is a good thing.
Examples:

🇳🇱 The Dutch government is ramping up the expropriation of our farmers, driving some of them to commit suicide. They’re a bunch of inhumane greedy liars and thieves who created a fake crisis to rob people of their rights and property.

Is this what ‘the free west’ is about? pic.twitter.com/wM3Wr6y1ZT

“We penetrate the cabinets.”
~ Klaus Schwab

The WEF Young Global Leaders programme – in their own words. pic.twitter.com/ojsoBjEPnt

The WEF sure has some interesting partners to its “Metaverse Initiative” 🤔 pic.twitter.com/UDPzD2c1Rr

There’s a Reason WEF Wants You to Live in Metaverse & Eat Bugs
September 9, 2022
In “Home of News, Politics & Opinion”

What the Zuck! Creepy New Name for Fakerbook – Update
October 28, 2021
In “Home of News, Politics & Opinion”