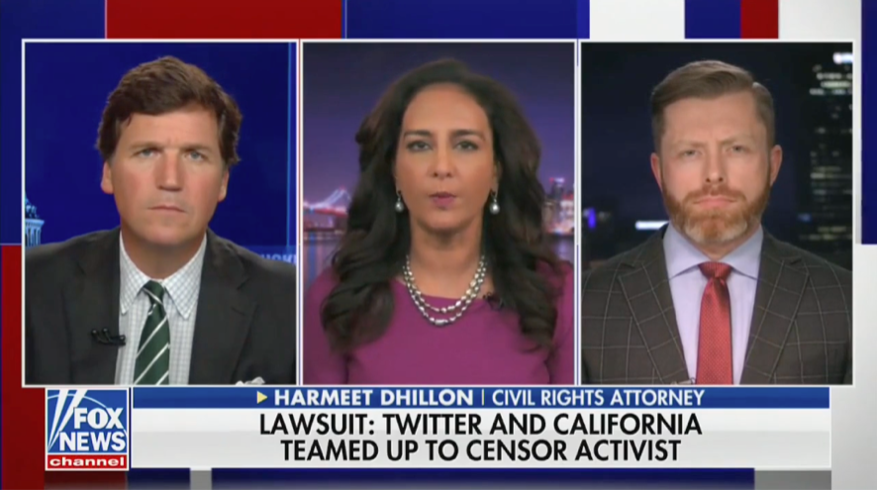 So, can I count on you to help us stand up to Twitter and Senator Alex Padilla by making a tax-deductible contribution of $25, $35, $50 or more to the Center for American Liberty today?

I’m not exaggerating when I say that this is the legal battle that will define our generation – and the future of our country.

Will we sit back and allow elitist politicians, billion-dollar corporations, and faceless government agencies to continue to trample our constitutional freedoms?

Or will we prove that WE, the American people, are still in control of our own lives?

Please join us in this critical fight to defend the First Amendment by contributing $25, $35, $50 or more to the Center for American Liberty today.

P.S. For four years, leftist politicians and mainstream media figures would not let go of the bogus and unproven accusation that President Trump colluded with Russia to “steal” the 2016 election.  But now that there is clear evidence that a California elected official colluded with big tech to censor conservatives who wanted to comment on the 2020 election those same leftists are dead-silent. I am absolutely fed up with left’s hypocrisy, double-standards, and blatantly unconstitutional behavior. That’s why I’m urgently asking you to contribute $25, $35, $50 or more to the Center for American Liberty to help us fund our lawsuit against Twitter and Senator Alex Padilla.

Please consider supporting our efforts to defend our Constitution with a donation today.

The Center For American Liberty is a 501(c)(3) charitable organization created to fight against growing anti-free-speech and anti-civil liberties trends.