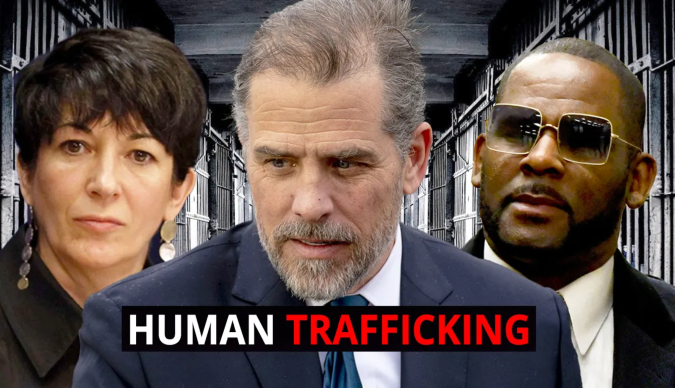 DEEP STATE PROTECTION FOR HIM

Ghislaine got 20 years. R. Kelly got 30 years. How many years will Hunter Biden get?

House Republicans announced an investigation into President Joe Biden’s family, including his son Hunter Biden, on Thursday, just a day after winning control of the lower chamber of Congress.

“I want to be clear, this is an investigation of Joe Biden, that is where the committee will focus in this next Congress,” GOP Rep. James Comer said.

Benny Johnson @bennyjohnson
Republicans put Biden Crime Family on NOTICE in first press conference in Majority— Best prosecution you’ll hear today “This committee will evaluate whether this President is compromised or swayed by foreign dollars. This is an investigation of Joe Biden.”
2:58 PM ∙ Nov 17, 2022
10,278Likes2,980Retweets

Last month, Marco Polo, a nonprofit led by a former President Donald Trump staffer, released a 630-page report with 2,020 citations that fully document 459 crimes committed by the Biden family and their business associates.

“Our number one goal is to ensure that Republicans don’t waste time.”

“The investigation has been done.”

“This report is a simple but extremely thorough roadmap for who needs to be subpoenaed for which timeframes and for what types of crimes.”

“All we’re seeking is the equal application of the law.”

“So far, this saga has been one of the greatest examples of double standards in American legal history.”

The report documents how Hunter Biden violated the Mann Act on at least six occasions, a sex-trafficking law that bars transporting individuals across state lines for illegal sexual activity.

This is the same law that federal prosecutors convicted Ghislaine Maxwell of violating when she persuaded an underage girl to travel from Florida to New York with the intention of having her engage in sexual activity with Jeffrey Epstein.

Violations of the Mann Act carry up to ten years of imprisonment, and Maxwell was sentenced to twenty years after being found guilty on two counts.

R. Kelly, whose legal name is Robert Kelly, was sentenced to thirty years after being found guilty of nine counts, one count of racketeering, and eight counts of violating the Mann Act.

The Marco Polo report uses emails, text messages, photographs, and videos found on the infamous Biden Laptop to diligently detail the First Son’s violations of the same federal sex-trafficking law that locked up Maxwell and Kelly.

For example, Hunter Biden, a former member of Amtrak’s board of directors, paid for three females’ Amtrak tickets from Boston to Penn Station in New York City so they could meet with him in Room 206 at the Roxy Hotel.

“Send me names and go to station. This is not rocket science. Wells Fargo is not denying card I’ve spoken to them twice,” Hunter text messaged one of the girls.

“Sorry if I [Hunter] seemed frustrated but I’m dealing with a [Biden] family emergency right now to [sic] and I promise you [that] you guys can figure this out if you can give [sic] my card to work for some reason then you have 600 bucks for 400 bucks whatever it is I swear to Christ I’m like sure you get 500 bucks back or 700 bucks back all right[.] I promise[,] OK[,] not a problem if it gets too late I’ll see in the morning but I [would] love you guys to be here[,] to spend the day in New York . . . fun and then go back up north[.]”

The female provides Hunter with three names to purchase tickets for before asking him if she should go to the train station and “Are you getting the tickets[?]”

Hunter responds, “Yes” and the financial transaction is confirmed via text messages, emails, copies of the digital tickets, and the females even send him a video of themselves on the train.

Hunter Biden then records himself having sex with the females with his laptop’s built-in webcam via the Photo Booth application.

The Sun, a British tabloid newspaper, released a video of the females lighting Hunter’s crack pipe in the shower:

18 USC 2421(a) – Whoever knowingly transports any individual in interstate or foreign commerce….with intent that such individual engage in prostitution, or in any sexual activity for which any person can be charged with a criminal offense, or attempts to do so, shall be fined under this title or imprisoned not more than ten years, or both.

18 USC 2422 (a) – Whoever knowingly persuades, induces, entices, or coerces any individual to travel in interstate or foreign commerce….to engage in prostitution, or in any sexual activity for which any person can be charged with a criminal offense, or attempts to do so, shall be fined under this title or imprisoned not more than 20 years, or both.

Joe Biden, who famously passed the crack cocaine laws that locked up millions of Americans, continues to deny that Hunter and his family have committed any crimes, but the evidence found on his son’s abandoned laptop tells a different story.

Hunter fully documented his violations of the Mann Act that put Ghislaine Maxwell and R. Kelly behind bars for decades.

Marco Polo’s report documents Hunter Biden violating the Mann Act on six seperate occasions, but perhaps the most egregious crimes are how the Biden family made millions of dollars as the U.S. frontmen for China’s Belt and Road Initiative.

To turn this passion into a career, I need your support: subscribers who sign up for $5 a month enable me to work full-time as an independent journalist and empower us to reach an ever-expanding audience. For the price of a cup of coffee, you become my largest benefactor, and my work continues to be accountable only to truth, freedom, and the American people.