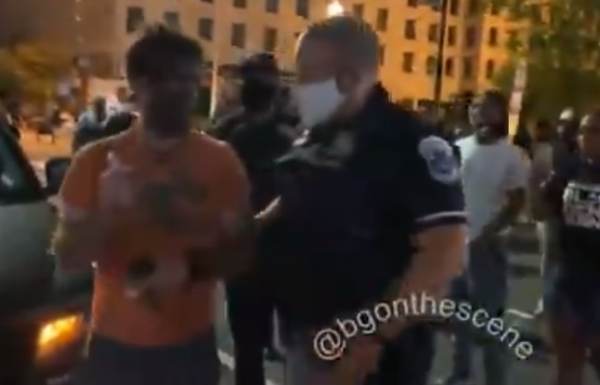 As police were speaking to the man, whose face was painted brown, at least two “protesters” ran up and hit him.

Black Lives Matter is so “afraid” of police that they fearlessly assault people right in front of them.

Chaotic scene just erupted in DC after a man in blackface showed up at Black Lives Matter Plaza #DCProtests#DCpic.twitter.com/Q18TAli073

Following the assault, police chased one of the men down and arrested him — as the mob tried to prevent them from doing so.

A crowd swarms DC Police officers as they try to make an arrest near the White House #DC#DCProtestspic.twitter.com/c1kiIKqvmD

It is unclear who the person in black face is, or why he thought that would be a good idea.

Militant leftists from all over the nation swarmed DC on Thursday to protest President Donald Trump’s Republican National Committee speech.

They have been roving the streets and attacking supporters of the president as they attempt to make their way to their hotels.

The mayhem in DC is ongoing and The Gateway Pundit will be continuing to provide updates as the situation unfolds.