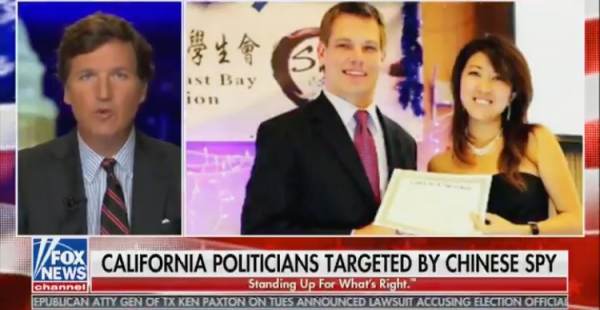 As reported earlier, a Chinese spy raised money for Democrat Rep. Eric Swalwell (CA) and planted an “intern” in his congressional office.

A Chinese national named Fang Fang, AKA, Christine Fang targeted politicians in California between 2011 and 2015 at the direction of China’s internal spy agency and even had intimate relationships with two Midwestern mayors, according Axios.

According to Fang’s friends, she was in her late 20s or early 30s when she enrolled at a Bay Area university and began to target politicians and gather intelligence at the direction of China’s Ministry of State Security (MSS).

Fang was a “bundler” for Eric Swalwell and other Democrat candidates but it is also believed the Chinese spy and honeypot had an intimate relationship with Swalwell.

Tucker Carlson’s team reached out to Swalwell’s office and asked if Swalwell had an intimate relationship with honeypot and spy Christine Fang and they replied they couldn’t comment because that information could be “classified.”

Swalwell cannot be trusted with classified information and should immediately be removed from the House Intelligence Committee.

Tucker Carlson rips into @RepSwalwell for accusing President Trump of being an agent of Russia after having had a relationship with a Chinese spy:

“It’s always those who have the most to hide who attack other people for the very things they’ve done.” pic.twitter.com/IT0P3whTFH